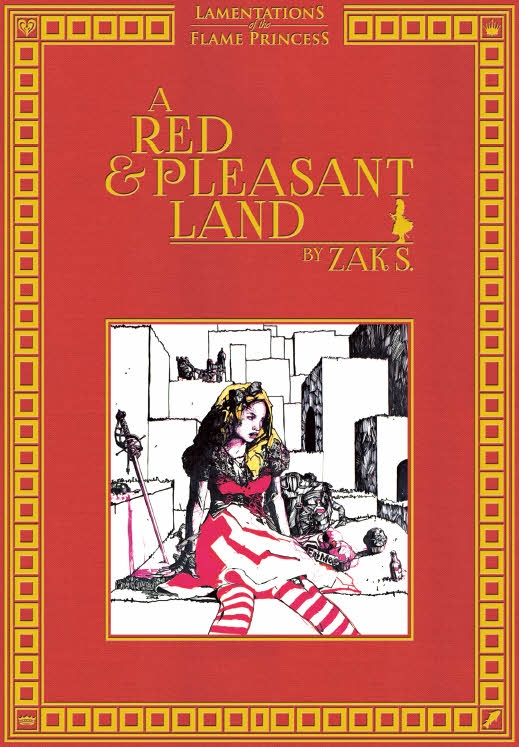 A Red & Pleasant Addition to Your RPG Tools Zak S.’s previous foray into RPG hardbacks was the chock-full-of-insane-creativity-and-usability Vornheim: The Complete City Kit. Much of what’s in A Red & Pleasant Land is like that. Turned up to 11. And sprinkled with pixie dust.

But I get ahead of myself. The Red & Pleasant Land is Voivodja, where the dreams of the vampires Dracula and Elizabeth Báthory battle for dominance through the chess and playing-card metaphors of Lewis Caroll.

What’s more shocking is how well it works. Zak’s usually formidable imagination is in overdrive here, giving us such monstrosities as the Humpty-Dumpty-like Red Rooks who attack with riddles, the double-bodied jub which is simultaneously both bird and reptile, and the Decapitated Lords who will lead the underclasses (mostly members of the suits Spades, Clubs, and Diamonds) in bloody rebellion against the Queen of Hearts as soon as they get their heads back. We get two castles to explore that embody both the delirium of Carroll without wallowing in randomness. And we get a new character class, the Alice (or Alistair or Fool), who’s special power is Exasperation that even the gods can’t help but notice.

Yes, really. And it all works.

Zak describes himself as a DIY sort of DM and is definitely of the by-the-seat-of-your-pants school. That being the case, the book is rounded off with a number of tools for DMs to use at the table in the middle of a game. These include suggested rules for handling PCs who are nobility, mass-combat and warfare, and courtly duels. There’s also a nice selection of random tables to help DMs and players answer questions like: what’s my native Voivodjan character’s background; what do I find on the body; what’s happening in the garden; what’s that goblin we just encountered doing; what’s the relationship between these two NPCs; and that perennial problem, what was your character doing while you were busy helping your grandmother move and not attending the last game session?

The stats and numbers for monsters and such are geared primarily for your more old-school versions of D&D, but will work handily with 5th edition. Armor-class, for instance, is listed as equivalent to common armors listed in the equipment section of your game-of-choice, making it very easy port between different editions, whether your preferred AC ascends or descends.

While a small and relatively slim volume, you won’t have any trouble finding A Red & Pleasant Land on the bookshelf. Its red cloth cover and shiny gold lettering look like one of those fairy-tale books from yesteryear. The interior is full of original art by Zak S. (because if you have an artist who’s work has been hung in the MOMA, of course you’re going to use that artist’s work, especially if that artist is you). It’s lovely, disturbing, off-kilter, and nothing like any other RPG book you own.