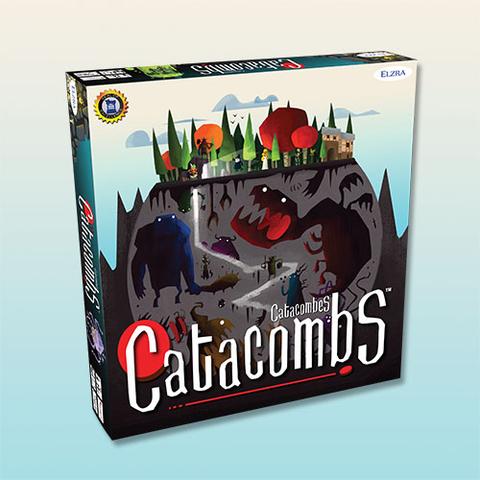 Love the dexterity-based, flicking action of games like Flipships but still want to explore a dungeon? Elzra Games has you covered with the third edition of Catacombs. You’ll need to explore a dungeon full of dangerous monsters and collect treasure before taking on the boss monster and saving the town.

Or, if you prefer, you can play the monsters and try to thwart the heroes. We at Dragon’s Lair Comics and Fantasy® may be a bit biased in our opinion of which is more fun but we’re always happy to devour- er, I mean, host delves for tasty wizards, elves, and chickens.

Yes, chicken is a playable hero in this game, with its Feathers of Fury special ability. However, if you prefer more traditional heroes, you can pick from the brutal barbarian, the clever thief who can find more treasure, and the elf archer. No group is complete without the wizard and their assortment of one-shot spells, but you might also want to play the skeleton hero who can’t be poisoned.

Getting poisoned usually happens when certain monsters attack you. If you get poisoned, you draw a poison card that will have a number on it. If the total score on those poisoned cards exceeds your character’s life score, they’re dead!

There’s a huge array of monsters in this game, from tiny, hard-to-hit rats to skeleton archers with stunning arrows to vicious rakshasa and boss baddies like the lich. They come with many different abilities and attacks, like the gelatinous cube who can swallow heroes whole. If you’re playing the monsters, you’ll draw cards that tell you which monsters to use, but you get to pick the board you’re playing on and place them as you will. The heroes start on one edge of the board and flick either themselves or their ammunition across the board to attack the monsters. The monsters retaliate the same way, so you’ll have pieces flying across the board, slamming into each other, looking for the bank-shot against the pillars or trying to hit multiple pieces in a single flick.

Halfway through the game, the heroes can spend their loot in the shop to buy better gear. There’s even a chance for dead heroes to return to the game. But then it’s on to clear out the lower levels and finally take on the challenge of the big boss monster.

While the game can take over an hour to play it feels quick because the turns go by so fast. Flicked pieces careen across the board, smacking into other pieces, making the game extremely dynamic. Brightly colored monster and hero cards put all the different abilities at your fingertips, so there’s no flipping through the rulebook to remember just what fire attacks mean. And a “wall” around the board means you won’t be scrambling to pick pieces up off the floor.

You can play Catacombs with two to five players. If you played an earlier version, know that the boards are bigger, there’s greater variety of monsters and heroes, and there are already expansions for the new version to add more variety. Ask one of our board game enthusiasts about Catacombs today.