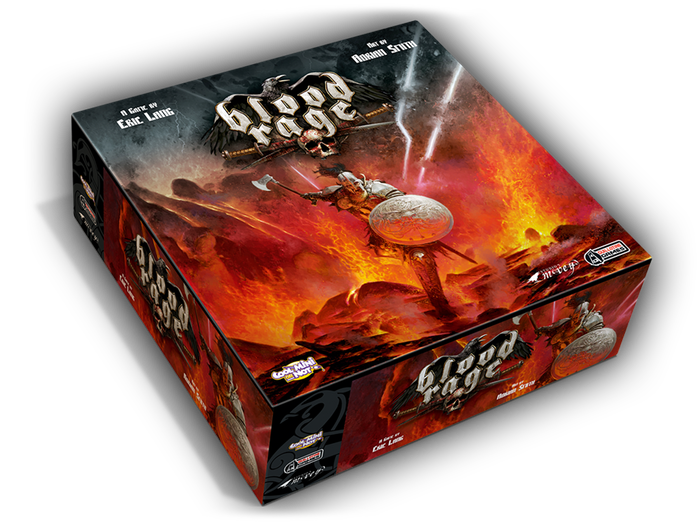 Blood Rage: Valhalla, I am Coming! In Blood Rage, you lead a clan of Vikings to glory in the final days of Ragnarök. For Vikings, there are many paths to glory and a seat in Valhalla. Sometimes, even death can win more glory than victory.

Blood Rage is a zone-control game, similar to Risk and Small World. You use Rage to bring your troops onto the board, move them around, or activate the cards that can enhance your troops or grant you glorious quests. Your clan’s other stats include Axes, which is how much glory you earn for victory in battle, and Horns which limit how many models you can have on the board.

There are also cards. The first step of every Age is a deck-building phase where you pick from a hand of cards and then pass the rest on to your left, repeating until all the cards are taken. These cards can “level up” your units, give you quests that can earn you extra glory if you complete them, or allow you to field various monsters like sea serpents, trolls, and ice giants.

The game is divided into three Ages. At the end of each Age, a new zone on the board is destroyed by the furies of Ragnarök. Any Viking (un)lucky enough to be in that zone is sent to Valhalla, earning extra glory for their clan.

Each zone not destroyed by Ragnarök can be pillaged to improve the stats of your clan. Instigating pillaging invites enemy units in adjacent zones to move in and fight against you. Once all the zones have been pillaged, or when no player has any Rage left, the Age end.

The goal of the game is to end the Third Age with the most Glory. There are many paths to Glory, including dying in Ragnarök, winning battles against the other players, or completing quests. Some quests, however, require that you have a certain number of warriors in Valhalla, that is, dead, before the end of the Age. Sometimes, you’ll get more Glory for dying than you might from victory, a truly fitting strategy for a Viking game.

The most potent source of Glory at the end of the game, however, is maxing out your stats. The best way to do that is to plunder the zones of the board. As Ragnarök destroys more zones with every turn, the competition for plunder increases, making each battle a do-or-die proposition. The art of Blood Rage is amazing, from the box, to the board, to the minis. Much of the art is provided by Adrian Smith of Games Workshop fame. He’s joined by 40k alum Henning Ludvigsen. Mike McVey is also given an art credit, and I assume he sculpted the game’s minis, all of which are excellent. The quality of the parts are also exceptional, with lots of detail in the miniatures which are free of flash or bubbles. The worst we saw in our box was a few bent spears and the like. While the minis are provided unpainted, the level of detail makes painting certainly worth the effort. Don’t be surprised if your DM commandeers a number of the pieces, especially the monsters, for villains in D&D or Pathfinder games.

Blood Rage is a fun game that doesn’t take too long to set up. The three-Age format keeps the game from dragging on and puts the focus on the fun parts: summoning monsters, fighting battles, and plundering conquered zones. Getting through all three Ages can take over an hour to accomplish; the deciding factor is often how long players take building their decks at the beginning of each Age. Because of the game’s reward structure, victory can easily go down to the very last turn in the final Age. If you thirst for tough battles, strategic challenges, and apocalyptic glory, you should definitely give Blood Rage a look.