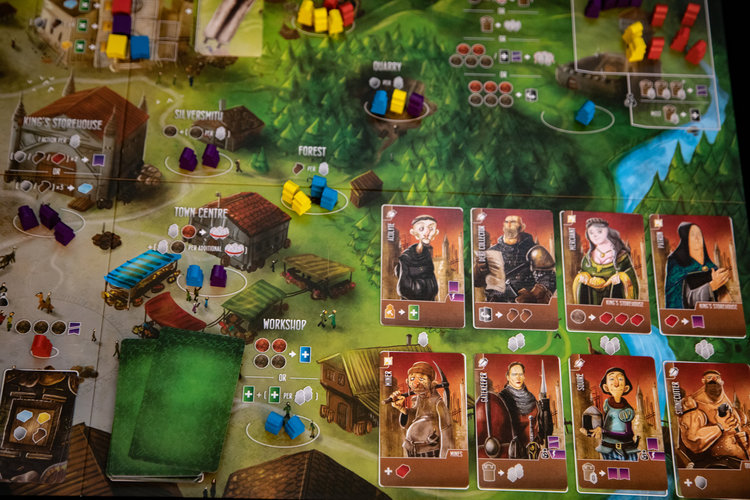 Architects of the West Kingdom from Garphill Games is one of those intriguing games that takes your expectations and turns them on their heads. It’s a worker placement game without turns, without the usual reset that allows you to gather up your workers, contemplate your strategy, and begin a new turn. And, instead of starting with a few workers and building up, you start with a lot of workers that you slowly shed over the course of the game.

The players take on the roles of architects in a Carolingian kingdom. Their goal is to acquire victory points by constructing buildings, contributing to the construction of a cathedral, and avoiding debts. Play is in a continuous round of placing workers to acquire resources like lumber, bricks, marble, gold, and coins, as well as apprentices necessary to complete buildings, and new building cards. Play continues in a round, with each player placing a worker and then reaping the harvest based on how many workers they now have in that location. If you run out of workers, you have to spend your turn removing one worker from the board to return to your pool.

There’s also a virtue track. Being high on the virtue track gets you victory points at the end of the game. However, doing that means not accessing the black market, a potential source for lots of resources. If your virtue is low enough, you won’t pay taxes, freeing up additional resources you can use to try to make up for the victory points you’re not getting. You can also place a worker in the town center and pay a silver coin to the tax pool. When you do that, you can then round up all the workers at one of the usual worker-placement resource locations and send them to the guardhouse. You get a coin for every worker sent to the guardhouse jail. Players with workers in jail can redeem those workers in various ways, and this is the primary method for returning workers to your pool for later placement. So, in fact, it can be helpful to you if another player does this to your workers, especially at spots where you’ve got a lot of workers stationed. In a pinch, you can use a turn, a worker, and a coin to round up your own workers; these don’t go to jail, they just return to your pool. Completing buildings requires that you put workers in the guildhouse; once there, workers do not return to your hand. So the better you’re doing, the fewer workers you’ll have, limiting your actions and the amount of resources you can gather at any location. This means a quick lead can actually bog you down, preventing any player from racing to victory.

Architects of the West Kingdom can entertain up to five players. There’s also a solo mode where you play against a pair of “AI” opponents whose actions are dictated by a deck of cards. The game typically takes an hour to an hour-and-a-half to play, but since there are no resets the game moves at a brisk pace. If you’re ready for a worker-placement game that will confound your expectations and challenge you with multiple paths to victory, talk to the folks at your local Dragon’s Lair Comics and Fantasy® today about Architects of the West Kingdom.