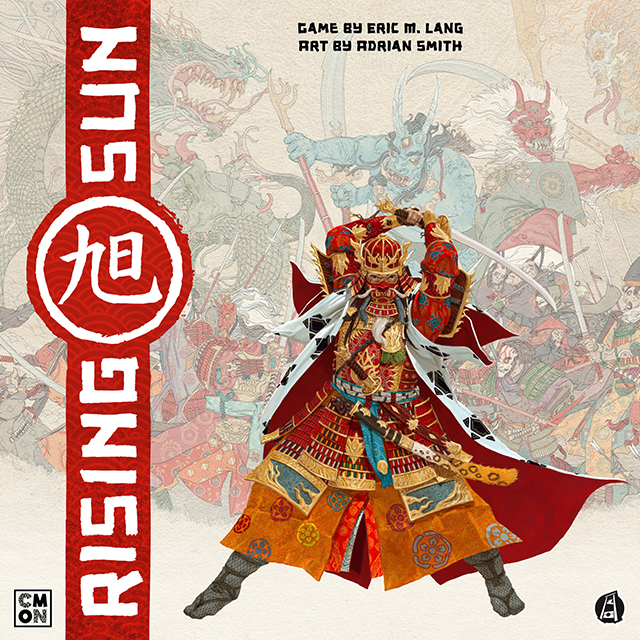 If you love Blood Rage but have been looking for something new, something with a bit more subtlety and interaction with your fellow players, CMON has got you covered with their new game, Rising Sun. Bringing similar area-control, amazing miniatures, and multiple paths to victory (including winning by losing), Rising Sun replaces Blood Rage’s brutal barbarism with a more sophisticated style of play.

Opening the box reveals what we’ve come to expect from CMON games: lovely art, lots of tiles and cards, and a horde (or is that hoard?) of jaw-dropping minis. You’ll be vying for control of medieval Japan against your fellow players, using diplomacy, strategy, the favor of various Kami, honor, and, of course, the shock of battle to secure points and win the game.

The game takes place over three seasons: spring, summer, and autumn, with point-tallying and victory taking place during winter. Each season is broken up into multiple phases. In the first phase, players join in alliances. Each player can only be allied with one other player. In the next phase, players take turns drawing the top three action cards from the deck and removing their choice for their action. With most cards, when it’s played, everyone gets to do the basic action (like claiming one coin for the Harvest) but the player who plays the card and their ally get a bonus action (like claiming the extra goody for each territory they control).

You can, of course, break off an alliance if you play the Betrayal action (allowing you to replace two figures on the board with two of your own), but doing so costs you Honor. Honor is used in lots of the games mechanics, and sometimes you want to have the highest Honor (like when breaking a tie) and sometimes it’s best to have the lowest Honor (which can get you extra benefits from some monsters).

When all the actions have been performed, it’s time to worship the Kami with your Shinto figures. Which Kami are in the game are randomly determined, and the player with the strongest force in a temple reaps the bonuses that Kami delivers. For instance, Fujin, god of wind, allows his top worshipper to perform two extra moves with their figures. Amaterasu, goddess of the sun, moves her top worshipper to the top of the Honor Track, no matter how low their Honor was before, and possibly bumping the other players down in the process.

Once that’s done, it’s time for battle! Which provinces are in play this season is determined randomly, as is the order they are fought over. Each player who has a force in that province shows the other players how many Ronin and Coins they have. Then, in secret, they place their Coins as bids on an array of four War Advantages. The player with the most Coins on a War Advantage gets to perform that action. These include Seppuku (kill all your figures in the province in exchange for Honor and Victory Points), Take Hostage (remove a rival or ally figure from the board to ransom back at the start of the next season), and Hire Ronin (which allows you to add your Ronin tokens and their points to your total strength in the province).
The player with the strongest force (after adjudicating Seppuku, Take Hostage, and Hire Ronin) automatically wins. All the figures of defeated and unallied players in the province are slain. After that happens, the player who won the Imperial Poets War Advantage gets one Victory Point for every figure killed in the battle. (Meaning it’s entirely possible to commit Seppuku, lose the fight, and still harvest a large pile of Victory Points at the end.) The losing players discard the Coins they used to bid on War Advantages, but the winning player gives their Coins to the losing players as war reparations. (Which means you could commit Seppuku, lose the fight, harvest a large pile of Victory Points and end up with a lot of Coins to spend on the next battle. Again, as with Blood Rage, it’s possible to win by losing in Rising Sun.)

Rinse and repeat for summer and autumn, with players tallying all their acquired points in winter. The player with the most points wins. Rising Sun is a game for three to five players, with five distinct clans to choose from, each with its own rule-bending special ability. Like Blood Rage, this isn’t a game to tackled lightly; there are lots of pieces to set up and playing the game to completion can take two hours. But, also like Blood Rage, Rising Sun is a game that rewards your time and attention with exceptional and varied play. The random elements and different clans mean that it’ll never play the same way twice, giving you a lot of replay value. Ask the board game experts at your local Dragon’s Lair Comics & Fantasy® about getting your own copy of Rising Sun today.