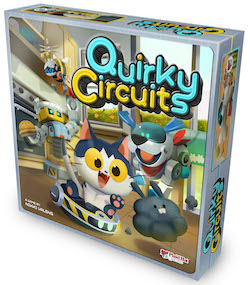 Quirky Circuits is an adorable cooperative board game from Plaid Hat Games.  Players work together to give a robot commands they hope will allow the robot to complete its task before the robot’s batteries run dry.

The heart of the game is a spiral-bound scenario book cleverly designed to keep things easy.  On the left-hand page, you’ll see which of four robots you’ll be using, set-up instructions and victory conditions.  On the right-hand side, you have the map your robot must navigate as well as the battery track.  The scenarios are designed to be easiest at the front of the book, growing more complex and difficult as you work your way through it.

To control your bot, each player will be given a hand of cards that give the robot instructions.  Players will place these cards face-down.  When all the cards are placed (every player having played at least one, and at least five cards played), they are turned face-up and performed in the order that you draw them.  Players are not allowed to communicate amongst themselves while dropping cards, and can only see the generic type of command each card belongs to, displayed by icons on the card’s back.  Players don’t take turns, but play as many cards as they wish in whatever order they wish.  Once all the commands have been placed, the battery tracker moves down one step, and play begins again.  If the ‘bot has completed its challenge before running out of battery, the players win.  Otherwise, the players lose.

The ‘bots each have their own quirks.  For instance, Gizmo, a disk-shaped cleaning ‘bot the family cat enjoys riding, turns left when it hits an obstacle.  Lefty, a sushi-making ‘bot, can only move via the aid of conveyor belts.  Twirl, who moves around with helicopter blades, can pick objects up and drop them, as can Rover, a robotic dog.

Because communication between players is strictly proscribed, this isn’t the sort of cooperative game where one player ends up telling everyone else what to do.  The book includes dozens of scenarios.  While some of the maps and scenarios can be fiendishly complex, because everyone goes at once it’s rare for a game to last longer than a half-hour, and most are completed in less than 20 minutes.  The game is for two-to-four players and the art by Danalyn Reyes perfectly captures the adorable nature of this game.  If you’re looking to add some cute and fun cooperative games to your mix, definitely ask the folks at your local Dragon’s Lair Comics and Fantasy® about Quirky Circuits today.