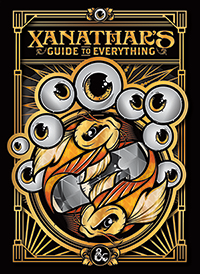 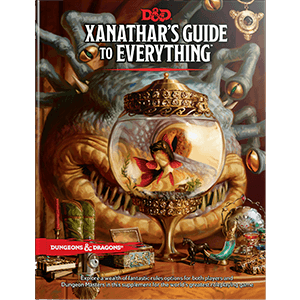 Way back when, I wrote in this space about the perils of bloat in RPGs. At the time, D&D’s fifth edition was brand new and Mike Mearls, senior manager for research and design for D&D, was promising a new direction. Stating that WotC would be exploring alternative methods for supporting an RPG, Mearls took direct aim at the problems caused by a bloated rule set. There would not be a Players Handbook 2 for 5th edition and releases would be more measured and considered.

Since then, WotC has given us the Sword Coast Adventurer’s Guide, a lot of hardback adventures, and Volo’s Guide to Monsters. Many of these included new races (especially Volo’s), backgrounds, and sub-classes for PCs. Note that’s “sub-classes,” not new classes. So we’re talking about new domains for clerics or archetypes for rogues.

That trend appears to be sticking with Xanathar’s Guide to Everything, the sister book to Volo’s Guide to Monsters. The Xanathar is a beholder crimeboss so it’s got a few opinions on those pesky “heroes” always interrupting its carefully laid plans.

The pre-release buzz promises a veritable horde (or is that hoard?) of new sub-classes, 20 in all. According to a Tweet from lead rules designer Jeremy Crawford, that’s two or more new sub-classes for every class except the wizard, which only gets one new additional sub-class. Don’t worry that wizards are being neglected; they’re getting a nice collection of new spells and class-specific magic items.

There are also additional feats for players to pick from. DMs get new rules for additional downtime activities the PCs might engage in, more options for traps, and a random NPC generator system.

This seems to me to strike a good balance between new content and avoiding rules-bloat. It’s still the same core character classes from the Player’s Handbook simply augmented by new options for each class. In addition, WotC has taken the feedback they’ve gotten from their Unearthed Arcana articles and trial options to ensure that these new rules are both wanted and good.

Xanathar’s Guide to Everything is a hardback book scheduled for release this November. You can pre-order it today, with either the standard cover or the alternative Hydro74 cover, from your neighborhood Dragon’s Lair Comics and Fantasy®.