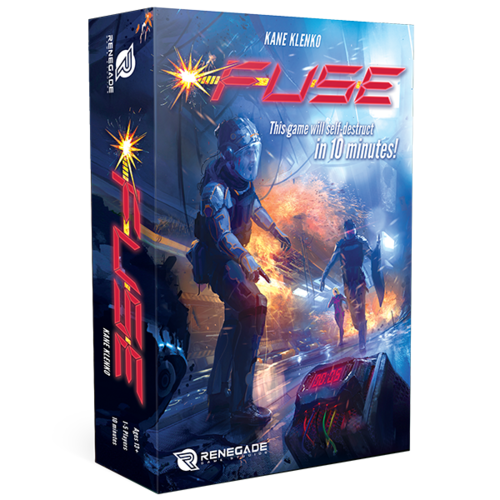 Disarming Bombs for Fun and Laughs Renegade Game Studio’s Fuse is not a game for people who like to take their time and think things through. Nor is it for the easily excitable. But if you enjoy a game that loves to ratchet up the pressure, if you thrive in chaos, or if your favorite part of an action film is a beeping clock, counting down to destruction, then Fuse is the game for you.

The set-up is a touch complex, so take your time with the rules the first time you go through them. Each player has a few cards in front of them, each card representing a bomb that must be deactivated to win. One player reaches into a bag, grabs a certain number of dice (based on how many are playing) and rolls them.

Players then try to match the dice thrown with the slots on their cards. You might need to match the color or the number rolled. Dice sometimes need to be carefully stacked in towers or pyramids (don’t knock ‘em over or you lose all your work and have to start over). Once you complete a card, dump its dice back into the bag and set it aside in your score pile before picking from a group of face-up cards and drawing a new one to replace the one you took.

How many dice you’re allowed to take depends again on how many are playing the game. And, of course, everyone else is trying to finish out their cards as well. Mad scrums for dice aren’t unheard of, but can be counter-productive because Fuse is a co-operative game. Nobody wins unless all the bomb cards are cleared, and you only have ten minutes.

Victory, therefore, requires speed and cooperation between players, though if you let everyone else grab first, you’ll end up with the smallest score at the end of the game, even assuming you survive. Good management of the dice bag and the cards will save you precious seconds.

Fuse is very challenging and rewards players who work out systems for handling those challenges before you start the timer. This is a game that won’t just test your speed at pattern-recognition, but also your ability to work together toward a common goal within a framework of friendly competition.

While any timer will do, Renegade Game Studio has provided an app you can download to help you get in the mood. Be warned; the app’s computer voice can be quite acerbic (and amusing) as it counts down towards the game’s end.

Fuse is a very flexible game, able to handle up to five players, and as few as one in a special solitaire mode. There’s also a special one-on-one mode as well, allowing you a broad range of ways to play the game. Since a game only lasts, at most, 10 minutes, you can get in a handful of games in a single hour, and the game is easy to set-up and very portable.