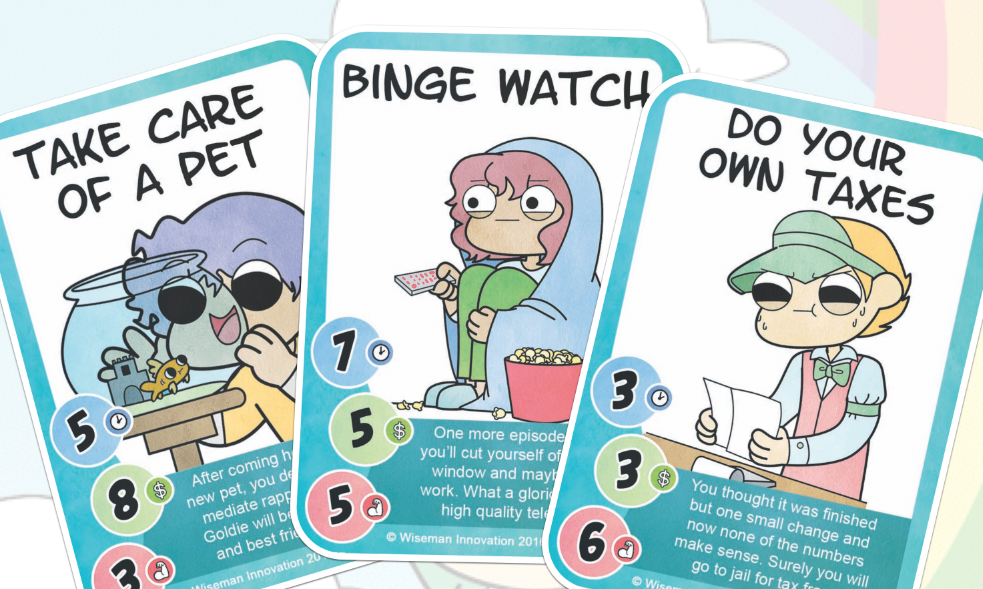 Pretending to Grownup is a new non-collectable card game about being an adult even if you don’t really feel like an adult. The cards feature adorable art by Megan McKay of Doodle for Food fame.

Gameplay is simple enough for even adults to follow. You start the game with five cards. Most cards have three scores on them: Time, Money, and Energy. On your turn, you can “squabble” with the player on your right. Placing one of your cards face-down on the table, you claim, “I have more time/money/energy than you do!”

Once everyone is in or out of the squabble, you turn your cards face-up. The card with the highest score in the chosen stat (Time, Money, or Energy) wins and claims all the cards as points. Get twelve points and you win at adulting!

There are also Unipegasaurus cards. These represent the power of imagination and each card bends the rules. Some grant you additional points or changing the scores on your cards. If you don’t want to do either of those things, you can Take on More Responsibilities. Doing this allows you to draw two new cards and add them to your hand. You may never have more than ten cards in your hand.

The game is simple to learn and fast to play. It can entertain 2-4 players and most games take about a half-hour to play. Find Pretending to Grownup, by Jason Anarchy Games and Golden Bell Games, at your Dragon’s Lair Comics and Fantasy® today.