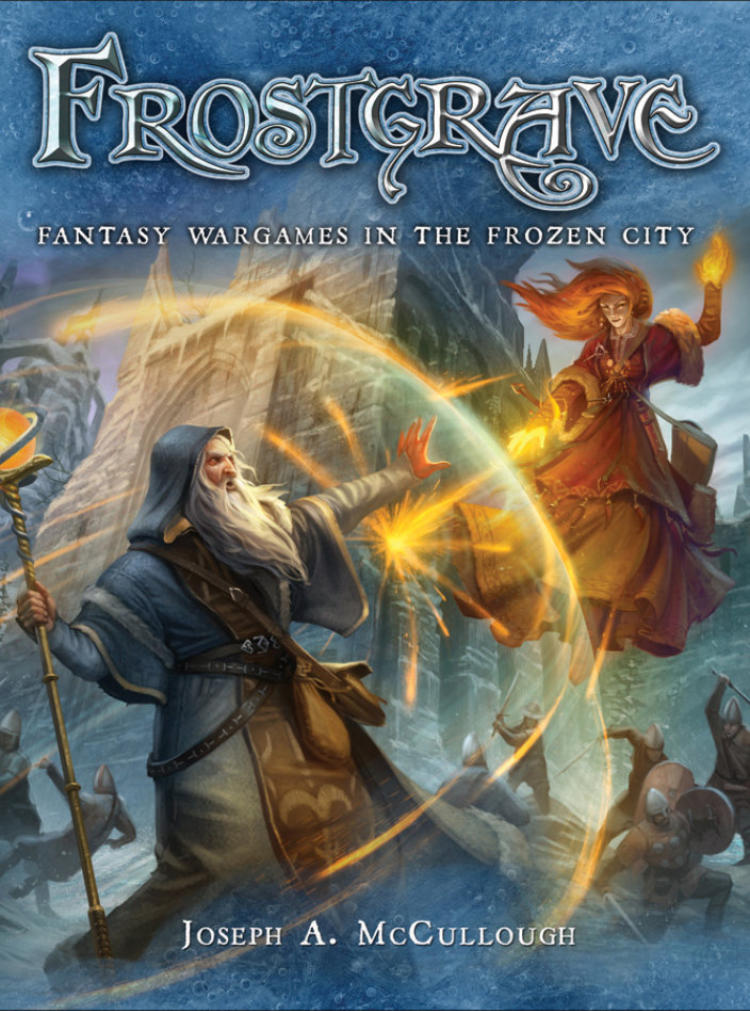 Frosty Osprey Takin’ it to the Streets If you’re a war gamer, you almost certainly know Osprey Publishing as the producers of lovely, full color military history books that have become the standard for historical detail and gorgeous illustrations of the common trooper, from the spearmen of the late Bronze Age Hittites to the modern Special Air Services of Great Britain. Osprey has recently expanded into producing their own wargames. Among the most celebrated of these is Frostgrave.

Frostgrave is a fantasy skirmish game. A thousand years ago, a mighty empire forged in sorcery spread across the land. But then a horrible cataclysm struck; the capital was covered in ice and the empire shattered. After the passage of centuries, that ice is finally melting, revealing the treasures and lost knowledge of the ancient empire. Spell-slingers from across the world now descend upon the city as the ice melts, revealing ruins, ancient horrors, and magical treasures worth killing for.

Your team is made up of a wizard and their warband, purchased as mercenaries via the game’s currency, gold coins. Since each warband can only have one wizard, most also include an apprentice for additional magical power. Wizards come in types which define which spells they can and can’t get and include chronomancers, necromancers, soothsayers, summoners, and witches. Spells can give you easier victory conditions, conjure demons to fight at your side, or just whack opposing units; your choice of wizard will strongly dictate your tactics.

The rest of the warband is made up of a motley collection of rogues that can include warhounds, thugs, treasure hunters, men-at-arms, barbarians, and the like. Each wizard can hire up to eight of these folks, so a full warband plus apprentice and wizard will be ten models.

There are fun terrain rules, including rules for pushing people off ledges and bridges, and taking damage from such falls. The denser and more complex your terrain is, the better the game will be. A patch of forest, a building, and a few fences won’t cut it for Frostgrave terrain. The rules recommend that the longest uncluttered line-of-sight should be, at most, “a foot or two.” This is important, as it keeps long-range sniper units like rangers and elementalists from dominating the table. The similarities between Frostgrave and Games Workshop’s old Mordheim game are obvious, with Frostgrave benefiting from a cleaner, leaner set of rules. The great thing about Frostgrave is how flexible it is. If you’ve been into war gaming or fantasy RPGs for at least a year, you probably already have enough miniatures to represent your wizard and warband, or even two or three. Your little goblins can be thugs, your elven spearmen or Skorne Cataphract Cetrati can be men-at-arms, and Viking warriors in maille can be knights. The game can be played on any size of table, even as small as two-feet-by-two-feet, meaning it’s really easy to find or make room to play. Games typically run less than two hours.

The game also includes a built-in campaign system. Victorious warbands can spend money to establish a base-of-operations (eight different kinds are offered in the core book) as well as new spells for their wizard or replacement mercs for those lost in the last raid. Frostgrave is being supported by the release of additional books, including an entire campaign, Thaw of the Lich Lord, plus additional scenarios, monsters to thwart friend and foe alike, and treasures. If you’ve got languishing fantasy miniatures needing a new lease on life, or if you’re interested in fantasy wargaming but are daunted by the cost and time needed to build a large army, you should definitely give Frostgrave a look.