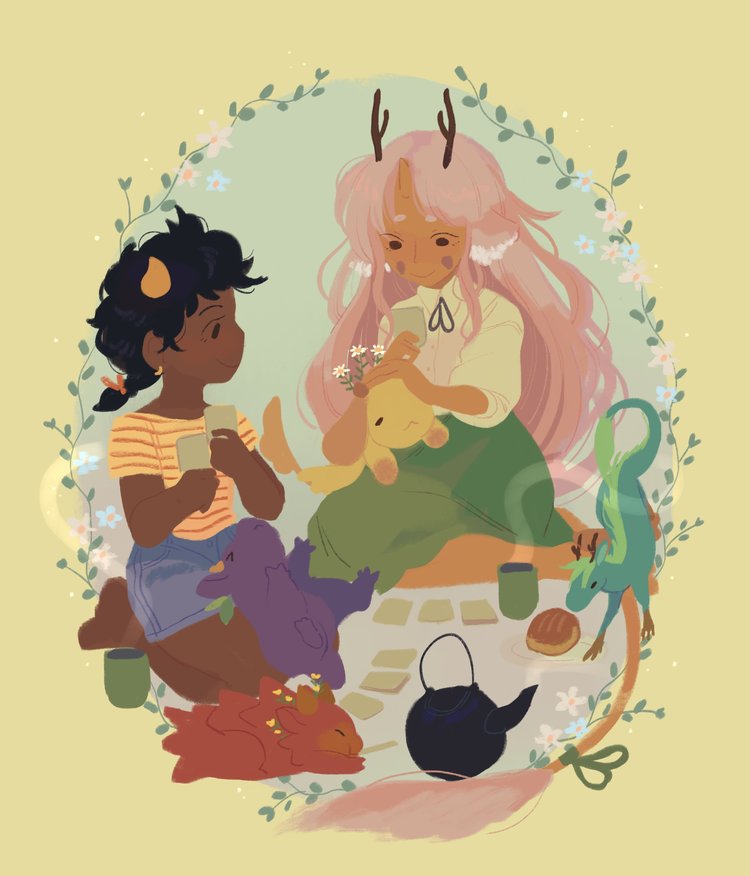 Fun with Your Personal Tea Dragon We here at Dragon’s Lair Comics & Fantasy® are very fond of dragons, as you’d expect. And it’s hard for us to pick our favorites from the many different types of dragons out there. Whether they’re fire-breathing dragons, undead dragons, cyber-dragons, shoulder dragons, plush dragons, or guardian dragons, we love them all. But we have to admit that tea dragons are possibly the cutest.

For those of you who haven’t read Katie O’Neill’s adorable The Tea Dragon Society, tea dragons are the “smallest and only domesticated subspecies of the dragon genus. They were bred by Sylkes from abandoned runt offspring of a small dragon species thousands of years ago, using herbs and spells to shrink their size and infuse them with plants.” Tea dragons require a lot of care since they’re mischievous, picky about their food, and have lost nearly all their survival instincts over the centuries. Still, they produce the most wondrous tea.

In Renegade Game Studios’ The Tea Dragon Society Card Game, you and your friends will take on the roles of a tea dragon’s caretaker. Your goal is to create the most and deepest memories with your dragon over the span of four seasons. You start by picking from one of four tea dragons, each of which has its own personality and quirks, as well as its special ability in the game and its own deck of 12 cards. These cards represent things you can do with your dragon, like feeding and grooming it, as well as mischievous ways your tea dragon can make your life more difficult, like being picky about what you try to feed it or nipping at your fingers when you try to groom it.

You then shuffle a deck of 28 market cards. You’ll lay out a market tableau of four cards in the middle of the table for everyone to pick from. There are also Memory cards for each season, and you’ll start by laying out a number of Spring Memory cards based on the number of players playing. Each card (that’s not a mischief card) has a Growth score (in the leaf in the upper-left corner) and a Cost (in the tea cup of the upper right corner).

On your turn, you can draw a card from your tea dragon’s deck. You place this card face-up in your Hold. If the card has instructions along the bottom, you perform them right away.

Obviously, you really want those Memory cards; they’re worth a lot of points. But they’re the most expensive cards. You can try to grow your Hold out large enough to purchase them, but watch out! Tea dragon mischief can cause you to discard some of your cards, as can memories from previous seasons. This creates a press-your-luck situation; do you buy the less valuable cards you know you can get now, or do you hold out in hopes of purchasing those high-point cards? The cards are of good quality and the mechanics are simple. You’ll quickly get the hang of the game and it usually takes less than an hour to go through all four seasons. Set-up is a breeze if you use rubber bands to collect the tea dragon starting cards together after your game is done. The art is adorable, the dragons are cute (even when they’re being naughty) and while interaction between the players is minimal, the need to get those high-point cards before your opponents do really encourages you to press your luck. Swing by your local Dragon’s Lair Comics & Fantasy® today to ask about starting your own Tea Dragon Society.