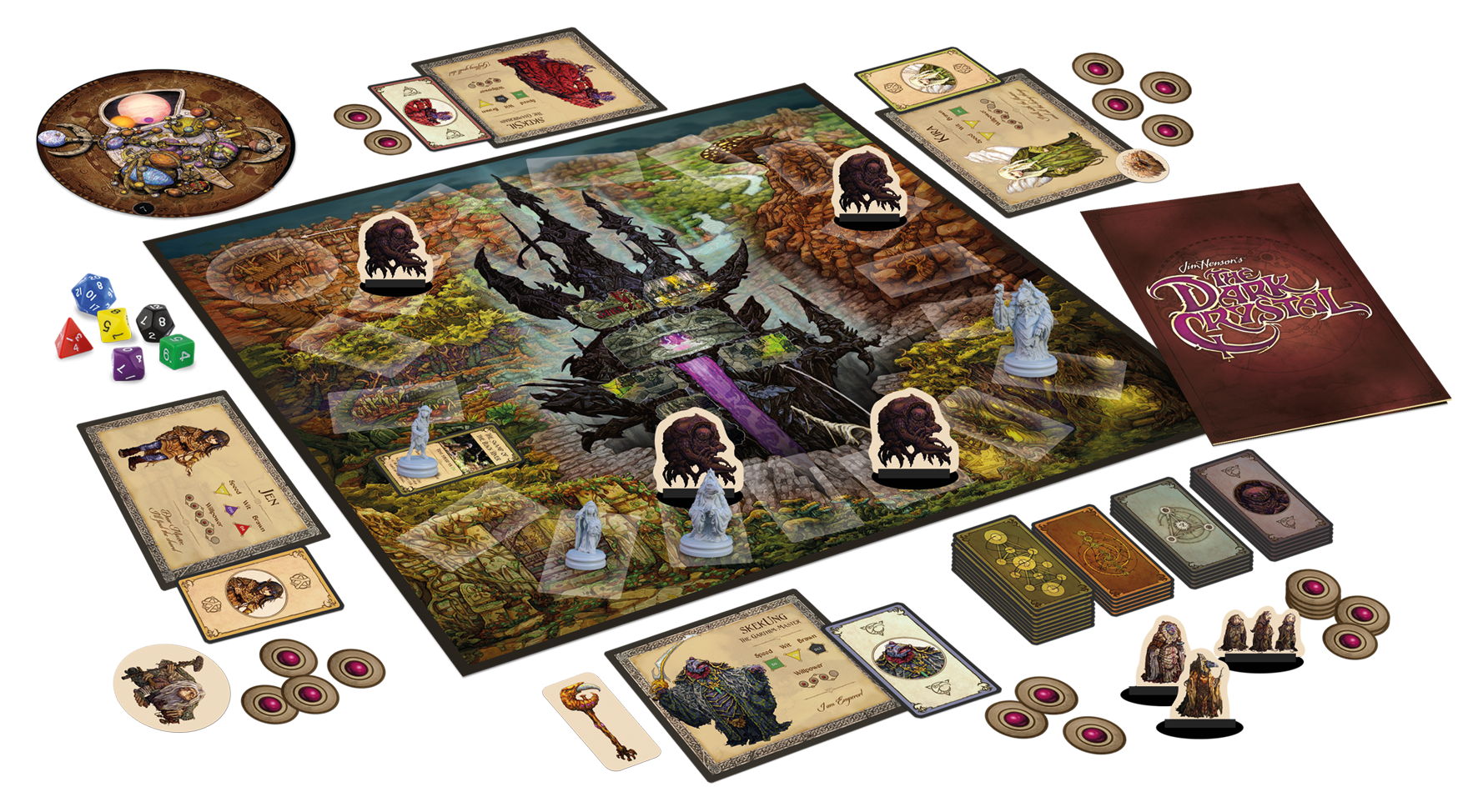 From River Horse, publishers of the Jim Henson’s Labyrinth board game, comes Jim Henson’s The Dark Crystal board game. As you’d expect, this game is lavish, with gorgeous Brian Froud-inspired art and photos from the movie throughout the rules, cards, and board.

The game follows the plot of the movie, with a timer based on Aughra’s orrery. One side of the turn track shows numbers and the other shows the three suns moving into conjunction. Players divide into two (kinda) teams. Two players take on the roles of the Gelflings Jen and Kira. These characters can move independently across the board but can also move together and cooperate, something they’ll need to do in order to win. Winning for the gelfings means they find the crystal shard and one of them gets it into the crystal chamber in the castle of the Skeksis.

The Skeksis players can pick between skekSil the Chamberlain (“MmmmMMMMmmmm…”) and his rival skekUng (who, in the movie, wins the Trial by Stone). The Skeksis players do not cooperate. In fact, only one of them can win, and they do so by occupying the throne room when the game ends.

The pieces that represent the players in the game are gorgeous miniatures, unpainted but full of impressive detail. The other mobile characters in the game are represented by cardboard stand-ups. These are all resources for the Skeksis players: four Garthim (the giant beetle creatures), a group of enslaved podlings, the Gourmand Skeksis, and the Slave-master Skeksis.

Most of the board is a circular track of blank spaces, described by a draw of the location cards, making the world unique each time you play. Players can also benefit from special cards and items that are faction-specific, such as Fizzgig, the toothy little fluffball from the movie.

While the game plays best with four players, there are optional rules for three or two players, as well as optional rules to adjust the difficulty level (useful if adults want to play with kids). The game takes about an hour to play. If you’re a fan the movie, you’ll want this Dark Crystal board game just for the gorgeous art and miniatures. The fact that there’s actually a fun game in the box is a big bonus. Ask for it at your local Dragon’s Lair Comics and Fantasy® today.