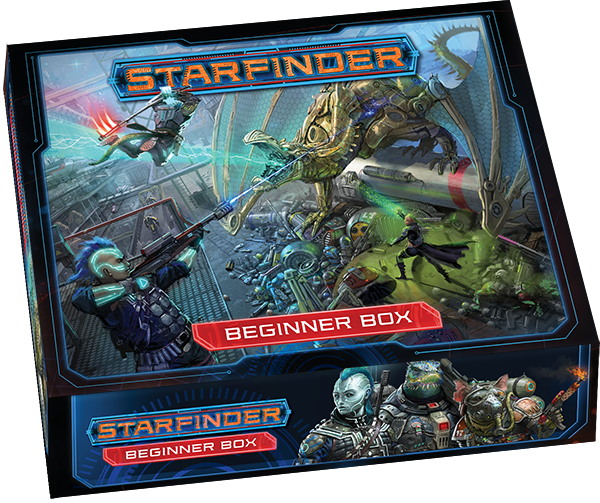 Getting Started with Starfinder

We’ve discussed Paizo’s Starfinder before, a science-fantasy RPG of the Pathfinder universe in the far future.  For those of you who are interested in the game, but who don’t have a lot of experience with RPGs in general, or Paizo’s games in particular, Paizo has a Beginner Box.

These get-started-roleplaying boxed sets have been getting better every year.  The Starfinder Beginner Box has the six pre-generated characters you’d expect, but also includes six player-aid cards for quick reference to the rules, more than 80 full-color cardboard pawns depicting monsters and heroes, a double-sided play surface that “works with any kind of marker,” a single set of dice, and blank character sheets in case you want to generate your own hero from scratch.  Even the box itself is a nifty thing, being big enough and sturdy enough to carry your dice, pawns, and adventure notes.

The 96 page Heroes’ Handbook (32 pages longer than my beloved Basic D&D book from the ’81 Basic box) also includes a solo adventure so you can try out the game even if you don’t have anyone else to play with yet.  Once you get a group together, one of you can use the 96-page Game Master’s Guide to run the included adventure or craft original adventures.  Even though everything is geared towards the beginner (seasoned RPGers might find the included adventure a touch on the simple side as it emphasizes mastering the basics over clever encounter design), there’s enough stuff in this box to craft an entire campaign that takes to PCs up to 6th level.

If you’re already familiar with the Pathfinder RPG, you’ll probably want to jump straight to the Core Rulebook.  While Starfinder isn’t a direct port of the Pathfinder rules to sci-fi, they’re close enough that you should be able to hop from one game to the other easily.  On the other hand, if you’re looking for a gateway for new players who are more interested in sci-fi than fantasy, or you know kids who are maybe a bit too old for No Thank You Evil! but still might need a helping hand to master an adult RPG, you’d be hard pressed to find a better box to gift them with.  Ask the RPG experts at your local Dragon’s Lair Comics and Fantasy® about the Starfinder Beginner Box today.