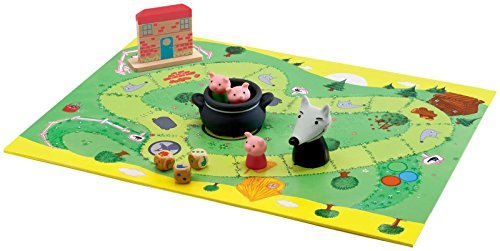 Huffing and Puffing with the Adorable Woolfy

Asmodee is bringing Djeco’s Woolfy to America! If you’re a fan of HABA’s games for children, you definitely need to check out Djeco’s games as well. Woolfy is a cooperative game for kids from 5 to 9 and lets you live the adventure of the Three Little Pigs.

Each pig wears a different colored shirt. One is blue, one is red, and one is green. You also have three dice, one matching in color for each little pig. The pigs move around the board, trying to land exactly on the Brick House space. Each time they do, they complete a level of the brick house.

Each die has a 1, 2 and 3 face. If you roll one of those, you get to move that color pig that many spaces in either direction around the track. You can’t move the same pig twice in a row (unless that’s the only pig still free to move). The dice also have a House symbol on them. If you roll the House, you move the pig to either the straw or wooden house (unless the brick house is complete, and then you can move them there).

There are also two wolf faces on each die. If you roll a wolf, you move the wolf clockwise around the track to the next space marked with a wolf. If the wolf passes a pig who isn’t safe in a house, that pig gets put in the wolf’s big pot! The goal of the game is to get all the pigs safely into the finished brick house before the wolf catches all of them. There are two spots on the track that will release any trapped pigs if a free pig lands on them.

Woolfy is a great little game that’s easy for kids to understand with a push-your-luck component as you try to land on important spaces while avoiding the wolf. The board, little pig pieces, and the wolf piece, are adorable and sturdy. A full game can be completed in less than a half-hour. If you’ve got wee ones that enjoy games or you’re looking for a great birthday present for a young relative, ask the good folks at Dragon’s Lair Comics and Fantasy® about Woolfy, or any of our other great games for young kids, today.