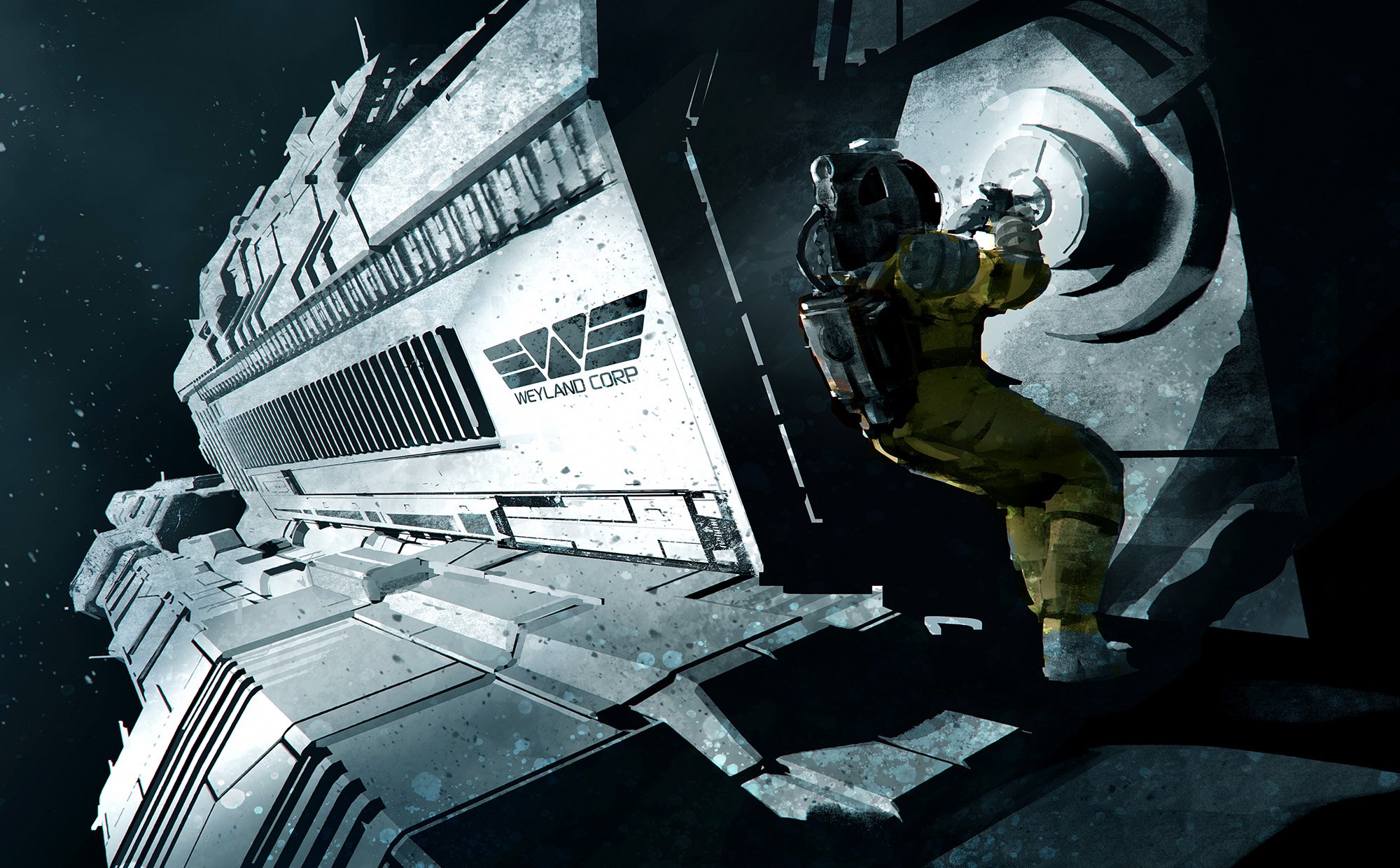 In Space, No One Can Hear You Roll Dice

It’s hard to overstate the impact ALIEN, the 1979 film, had on the world of sci-fi, especially if you also talk about it’s amazing sequel, ALIENS.  Almost single-handedly, this movie franchise pioneered a new sort of sci-fi, a grungy, blue-collar space opera where amazing vistas of spinning planets hanging gem-like upon the black satin of deep space hung outside the windows of breakrooms littered with dirty coffee cups.  Banished were the minimalist stages of the original Star Trek series or the pristine and gleaming white chambers of 2001: a Space Odyssey, replaced by claustrophobic tunnels cramped by grungy, dripping pipes.

So it’s hard to believe we haven’t had an official RPG based on the franchise before now.  Now that we do, however, we got a good one.  Free League, the same publisher that brought us Tales From the Loop and The Forbidden Lands, has just released ALIEN: the Roleplaying Game, fully licensed by 20th Century Fox and chock-full of the grungy, workaday space opera shot through with horror you’d expect.

The game is designed to be played in two modes.  The traditional Campaign Play mode is what you get in most RPGs: an extended series of episodic sessions that can cover years of both real and in-game time that let you explore the lives of your characters as they work towards whatever goals they may have.  The other mode is called Cinematic and it more closely resembles the movies.  Cinematic scenarios are meant to be played in a single sitting, are geared to be far more fast-paced and to include conflict between PCs as well as frequent PC death.

Both modes use the same core mechanic, which has a lot of similarities with the mechanic used in Free League’s other games.  If you’re fan of Tales From the Loop, you’ll have little trouble mastering the mechanics in ALIEN in spite of the latter game being far more deadly.  As before, you’ll be rolling a pool of d6s based on your attributes (Strength, Agility, Wits, and Empathy) and your skills.  Every 6 you roll is a success.  If you fail to achieve enough successes, you can try to push yourself.  This allows you to roll again, but this time with an additional level of Stress.  Every level of Stress means you roll an additional d6 when making tests.  This makes it more likely that you’ll succeed (you’re more alert and the adrenaline makes you faster and stronger) but if you roll a 1 on any of your Stress dice, you immediately roll on the Panic table.  This involves rolling a d6 and adding your current Stress level and, as you’d guess, the higher you roll, the worse it gets.  Results can include things like acquiring a nervous twitch that increases your stress level, and the stress level of all friendly PCs nearby, by 1.  Or you flee randomly, decreasing your Stress by 1 but forcing every friendly character who sees you to also make an immediate Panic roll.

Obviously, this creates situations where groups start to break down together.  A little Stress can be a good thing as it makes it more likely your character will succeed, but snowballing Stress can cause problems for an entire group.  As one character begins to lose their cool, it will eventually affect everyone with them.  Amusingly, this creates situations where it makes sense to split up the party.  After all, if everyone else is running around with lots of Stress but you’ve kept yours tamped down, you don’t want to be hanging out with people who could freak out at any moment and force you to take Panic tests.

All characters are human and have a career, which can be Colonial Marine, Roughneck, Company Agent, or even a Kid like Newt.  Each career comes with a package of abilities and ways to relieve Stress.  While a collection of different careers is obviously beneficial, there’s nothing preventing you from playing with all Kids (so long as you’re more ok with kids dying than the movies were).

The game is clearly designed to push at (and even beyond) the borders of the ALIEN franchise.  The Marshall career is clearly modelled after both Connery’s character in the Outland movie as well as Cole Hauser’s William J. Johns from Pitch Black and carries a bit of resonance from the corp-bought-and-paid-for cops we see in The Expanse.  While you could have the PCs run into the xenomorph every session, the GM (in this game that stands for Game Mother) is encouraged to keep things fresh by tossing additional challenges at the players.  This RPG will work very well for any situation that puts the characters in high-stress situations where they don’t know enough about what’s going on, don’t have enough resources to easily deal with the situation, and can’t call for help from the large, uncaring nations and corporations who, through greed or neglect, put them into harm’s way.  The game includes rules for radiation damage, vehicles, and even space combat, though it keeps these things fairly simple and the focus on personal survival.  There’s just over 100 pages of setting material (the game is set right after the events of ALIEN 3), describing a universe in which giant corporations and multi-planet nations scramble for any advantage they can secure against their rivals.  There are tools to help GMs generate planets, star systems, jobs with complications (including cargo runs, salvage jobs, rescues, and exploration), and random encounters.  We get a map of the Novgorod station and a Cinematic scenario where players get to experience the last days of Hadley’s Hope, the colony of the ALIENS movie.

As you’d expect from Free League, the core book is full-color and well organized with an index and star maps on the inside covers.  They’ve also published a Game Mother’s screen as well as custom dice and a Cinematic adventure, Chariot of the Gods.  If you’re looking to add one-shot science-fiction horror to your gaming rotation or want a long-running campaign of survival and exploration in a hostile galaxy, ask the totally non-synthetic RPG experts at your local Dragon’s Lair Comics and Fantasy® about the ALIEN rpg today.