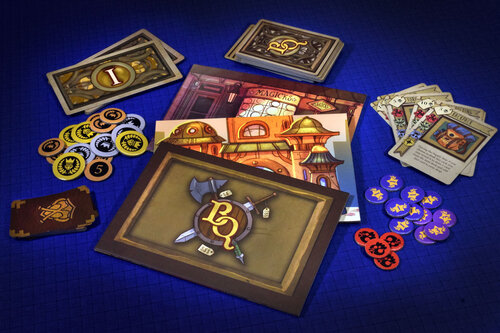 Oh no!  A fearsome and dangerous villain is threatening the town!  Will you and your friends take on the roles of valiant heroes, risking all to save the day?

Nope!  Not today you won’t.

Today, you’ll be taking on the roles of the owners of the shops the heroes will patronize before sallying forth to challenge the villain.  Renegade Game Studios’ Bargain Quest is an adorable, humorous, and fun game where you’ll draft a hand of merchandise cards, lure heroes into your shop with intriguing window displays, and, hopefully, sell the hero that shops in your store just the right gear they need to vanquish the villain.

Play begins with every player picking their shop.  The shops are represented by folding play areas so your first act after picking your shop is to literally open your shop.  You’ll then shuffle three villain decks, each full of antagonists of greater challenge then the first, and pull the top card off each deck.  The Level 1 villain gets turned face up so everyone can see what it is, while the other two remain face down for now.

Then you’ll draw a number of heroes equal to the number of players from their deck, placing them face-up on the table.  Finally, you’ll draw cards from the merchandise deck, and each player will pick one card from the hand before passing the remaining hand to the player on the left.  Once everyone has a full hand of merchandise, each player will pick one item from their hand to place in their display window.  Each item has a number of hearts on it to show how alluring it is.  The player with the most alluring item goes first, picking a hero to shop in their store.

Every hero has at least one class (such was warrior or rogue) and starting cash.  When you lure a hero into your shop, you can then sell them any item in your hand that applies to their class and that they have the cash to afford.  You give the hero the items, you take the hero’s coins, and play moves to the player with the next most alluring item in their display area.

Once everyone has had a chance to sell things to a hero, the heroes then marshal out to face the villain!  But before they do, you’ll draw an adjective card which describes the hero in this fight.  The hero might be forgetful and leave behind one of the items they bought, losing its benefits.  Or the hero might be clever today, gaining +1 to their Defense, or they could be reckless, sacrificing a point of Defense to gain two points of Offense.

Surviving heroes discard their merchandise and adjective cards, and acquire a number of coins listed on the villain card (more if the villain is slain).  Each player gets to keep one of the merchandise cards they still hold in their hands, but must discard all the rest.  New heroes are drawn to replace any slain heroes.

At this point, the players can each use their coins to purchase upgrades for their shops.  They can upgrade their display space, allowing them to place two items there and combine their number of allure hearts.  They can purchase more storage space, allowing them to hold on to more cards at the end of each round.  Or they can hire staff for their shop, like a sales clerk who allows you to increase or lower the price of a single item by up to five coins, or a city guard who protects your shop from any negative effects created by the currently active villain.  You can even hire a burglar to steal from shops that have more victory points than you do!  Or you can hire weaponsmiths, scribes, or alchemists, each of which can add additional bonuses to the hero who shops at your store, assuming they have the appropriate classes.

Once each player has purchased the upgrades they wish and can afford, play starts again with each player drafting a new hand of merchandise, plus the one merchandise card they kept from last turn.  Once the third villain has been defeated, you convert every five coins you have into a victory point, and the player with the highest number of victory points wins.

Bargain Quest can entertain between two and six players and games generally last between 30 minutes and an hour.  The art by Victoria Ying is adorable and fits the comedic tone of the game perfectly.  I’ve heard a number of people describe Bargain Quest as a good gateway into boardgames since it has a humorous theme and it’s easy to understand the consequences of your actions, for good or bad.  The interactivity of the game, from the drafting to the “bidding” on who goes first will keep more experienced players from getting bored; the game is easy to understand, but certainly not simplistic.  If you’re a fan of deck-building games, fantasy spoofs, or need a good way to introduce people to the joys of boardgaming, talk to the folks at Dragon’s Lair Comics & Fantasy® about adding Bargain Quest to your collection today.