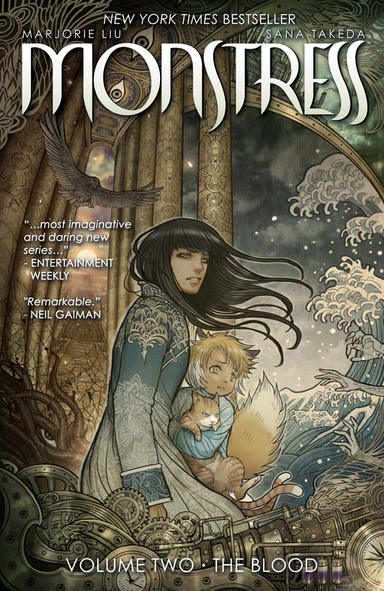 Since we’re still all practicing our social distancing and staying home more, here are some more great reads to help fill your time with wonderment and fun.

From the creator of Captain Underpants comes a new series of comics.  The fertile imaginations of a pair of friends create the greatest comic in the history of ever!  When cat criminal Petey uses a bomb to dispose of Police Officer Knight and his much smarter canine companion, Greg, he doesn’t count on a clever nurse suggesting the two wounded heroes be combined to create Dog Man, the “world’s greatest cop!”

The conceit that the comic is created by a pair of elementary school kids for their friends trowels on the charm, from the hashed out misspelled words to the adorably clunky drawing.  It won’t take you long to decide whether or not you’ll be swept off your feet by the crazy stories and lovable characters.

If Dog Man isn’t your thing, here’s something completely different.  Saga is a very post-modern look at pop culture, love, prejudice, and so much more.  It’s won damn near every award you can think of and is still going strong.  Alana from the planet Landfall, has wings.  Marco, from the moon Wreath, has horns.  They meet during the war between their worlds at a prison camp, where they fall in love and run off.  This, of course, is only the start of their troubles that involve bounty hunters, self-doubting royalty, living starships, and parenthood.

The Saga story now consists of nine trade paperback books which have themselves been gathered into three hardback volumes.  It’s still the same creative team of Staples and Vaughan.  If you’ve never read Saga before, or if you have but for some reason you’ve lost track of the series, now is the perfect time to pick it back up.

The story of a set of magical keys and a mysterious house.  In the basement of the house is a portal to the haunted plains of Leng.  When the demons of Leng attempt to enter our world through the portal, they are transformed into magical “whispering” iron which manifests magical properties when forged into keys.  But the inhabitants of Leng can enter our world if the possess someone from our world and inhabit their body.

Locke & Key is a multigenerational story about what happens when the keys are discovered and an inhabitant of Leng is accidentally released into our world.  The writing is amazing and the art is suitably moody and atmospheric.  However, be warned: the comics are much more graphic in their depictions of violence and gore than the TV series.  Fans of the comic and show can look forward to a new card game from IDW, Locke & Key: Shadow of Doubt, set to release later this year.

This is a series with epic levels of worldbuilding.  The Cumaea are an order of sorceresses whose source of magical power is the consumption of Arcanics, a race of magical beings who can sometimes appear human.  On top of this terrible conflict, throw on multi-generational conflict, politics, a young woman’s quest for revenge, and eye-popping, gorgeous art.  If you haven’t checked out Monstress yet, it needs to go on your must-see stack. And if you haven’t picked up yours yet, be sure to ask if the special Dragon’s Lair Comics and Fantasy® cover of the first trade paperback is still in stock.