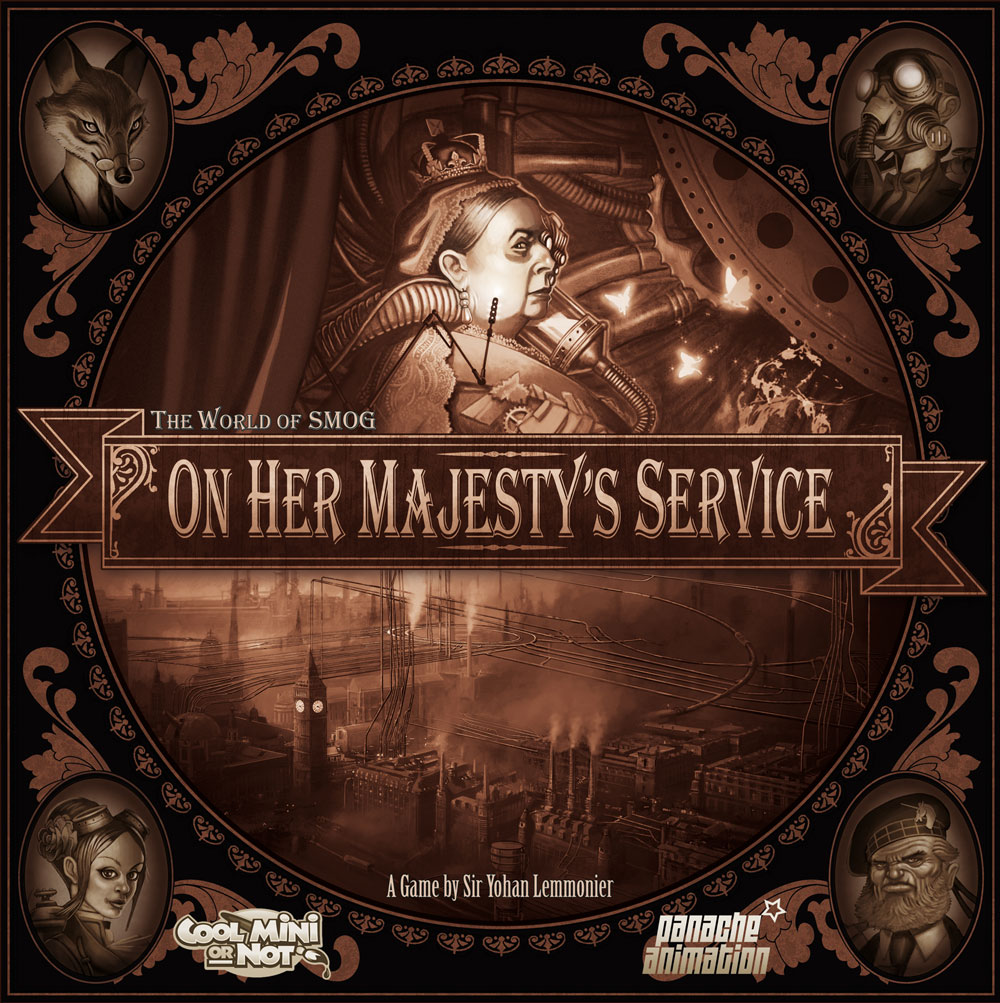 On Her Majesty’s Service is a bizarre but intriguing strategy game with a dynamic board. It’s got a strong steam-punk and dream-scape themes and rewards players who plan ahead and can guess what their opponents are likely to do.

The game includes a horde of tiny pieces, so I would not suggest this game for young kids. (In addition, many of the pieces are rather macabre; kids will either love them or get nightmares from all the disturbing skulls and whatnot.) The game supports up to four players and typically runs about an hour (though our first few games went quite a bit more quickly after we figured out how to set up the board).

The board has twelve wheels and a thirteenth round space. Where you sit is vital, as it dictates how you read each wheel. Each wheel has four numbers on it, and you use the one closest to you (it’ll also be the one that’s right-side up). Those numbers allow you to buy and sell four different flavors of ether, and four different lock-and-key themed artifacts. Each player has a secret win condition which requires them to acquire all four artifacts and a randomly determined collection of ethers, and move to a particular spot on the board, also chosen by random card draw. Nobody knows what the other players’ win conditions are, but since everyone needs all four artifacts, it’s pretty easy to see who’s in the lead (and thus which player you should all gang-up on).

In addition to buying and selling ethers, the players can also spend their coins in an open bidding mechanic in an attempt to win the Shadowmaster’s favor. Having the Shadowmaster’s favor means you go first in a round, you get an extra action every round, but you have to spend at least one coin every round to keep that favor, even if nobody else is going to spend any. You also get to move the agents around. The agents are four pieces that affect actions on the wheel they occupy. Some cause you to lose an action or a coin if you start your turn on their wheel. Others give you bonuses to buying or selling. So the game is largely made up of manipulating the wheels to give you the best advantage in buying or selling, thwarting your opponents’ plans, and buying and selling to bank enough coins to achieve your victory conditions. It looks fiendishly complex, with nine different possible actions every turn, all of which are altered by the position of the wheels, and different for each player depending on where they are sitting.

If you’re intrigued by a game that looks like it might have been designed by Cenobites, full of macabre imagery and a complexity of moving parts, then On Her Majesty’s Service definitely the game for you.