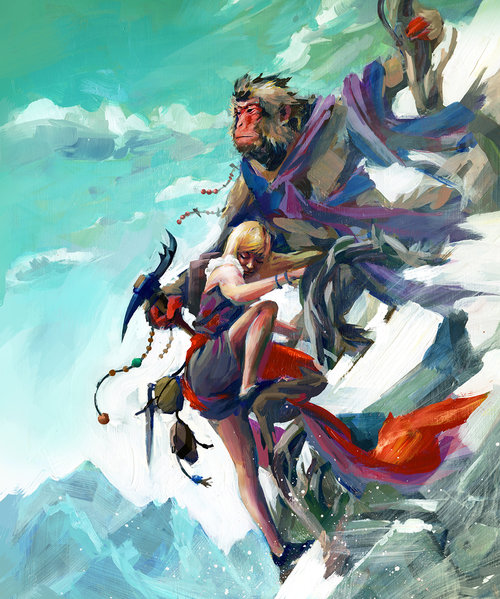 Special note! This week at all four Dragon’s Lair Comics & Fantasy® locations you can meet two of the creators of Overlight! Check the webpage for locations and times! It’s an amazing time to be into RPGs. Decades of play and thought and experimentation have been turbo-charged by the recent unprecedented success of D&D. RPGs are refining what they’ve been and done before, as well as treading new ground. Renegade Game Studios’ kaleidoscopic fantasy RPG Overlight manages to do both at once.

What is kaleidoscopic fantasy? The authors of Overlight describe it as a fantasy genre inspired by artists like Julie Bell, Moebius, and most especially the album covers of Roger Dean. It mingles the melancholy and sense of loss from Tolkien and Peter S. Beagle with a grounding in the present and an urge to heal that you find in the works of Ursula K. Le Guin. It is fantasy that is underpinned by the peoples, cultures, and philosophical underpinnings of a world.

In short, Overlight is a high-concept RPG, but one that is meant to actually be played. If you remember some of the high-concept RPGs of the early ‘80s and ‘00s, you’ll understand what I mean by that; many of those games had incredible worlds and bizarre creatures, and they left a lot of GMs wondering what they heck they were supposed to do with it, or how they would even explain it to their players. Overlight overcomes these issues with a world whose spiritual crises has taken solid, physical form. A world (our world, the writers strongly imply) was blessed with seven radiations, seven spectra of light, knowledge and wisdom that allowed humanity to create wonders. But unlocking the eighth spectrum invited disaster; the illumination that was the underpinnings of the world was broken apart, as if by a prism, and so also was the world broken apart. Now there is no sun or moon, but the Overlight, beaming the scattered spectra down upon different Shards, floating continents in the sky. Each continent is favored by one spectrum, and its inhabitants more fully express both the virtues and the vices of that spectrum.

And so, of course, your character is defined by these spectra, called Virtues by the peoples of this shattered world. They include violet Wisdom (governing skills like Folklore, Intuition, and Perception), blue Logic (with Windlore, Machinery, and Science), green Compassion (including the skills Beastways, Inspiration, and Performance), yellow Will (which adjudicates the Craft, Persuasion, and Resolve skills), orange Vigor (governing Athletics, Blades, and Survival), and red Might (including Brawl and Resistance). These are described as Virtues and each of the floating Shards reveres one Virtue over the others. And most of the PCs don’t share the same core Virtue as the culture they come from; this “spiritual divide between themselves and their friends and family” serves as a source for wanderlust and empathy. From this list of Virtues and their attendant skills, you can already get an idea of what characters do in an Overlight campaign. Your Virtues are defined by dice, starting with the d6 and going up. When you make a test, you’ll roll a handful of dice (usually six) and count up every roll of 6 or higher as a success. You’ll also roll a d4, the Spirit Die, which can boost your results (usually only if you roll a 4 on this die). The more successes you get, the better the results, allowing you to even accomplish secondary objectives on a single excellent roll.

Your character will also have a pool of Spirit Points you can spend to boost your scores, but these do not refresh regularly. Instead, “the GM will reward characters with Spirit Points at suitably dramatic moments in the story (e.g., succeeding at a difficult task, which would result in a morale boost).” And you’ll need those points to fuel your Chroma.

Chroma are special powers and abilities you choose from a list based on your core Virtue. You roll for successes when using Chroma based on the dice of two virtues (dictated by the Chroma you’re using). You also roll the Spirit Die, but this time the result is how many Spirit Points it costs you to use the Chroma. If you spend more Spirit Points than you have, this causes a Shattering, potentially permanent effects on your character. Each time you Shatter on the same Chroma, the worse it gets (though many of the effects are not entirely negative, and some can be extremely beneficial). Shatter too often, and you could lose the ability to use that Chroma. And so now we can see the three pillars Overlight is built on: a textured and thematic world; characters who explore and interact with the physical and cultural landscape of this world; and permanent change, both to the characters and the world. There’s a lot more to say about this unique game. We haven’t touched on the different races (one of which is a spiritual gestalt of two creatures), the cultures and geography of the different Shards of the broken world, how people travel between the different Shards…

If you’re eager to learn more, Paul Butler and George Holland, the creators of Overlight, will be visiting your local Dragon’s Lair Comics and Fantasy® this weekend, and will be happy to talk about their new game with you. This Saturday they’ll be in the Houston store from 10 AM to 12 PM and the Austin store from 4 PM to 6 PM. On Sunday, they’ll be in San Antonio. From noon until 2 PM they’ll be at the Medical Center location, and from 4 PM to 6 PM you can see them at the Alamo Ranch store. Contact your local store to learn more.