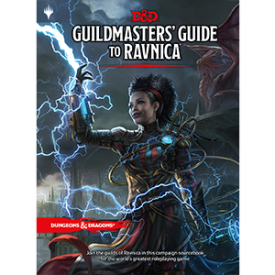 If Blackstone Fortress wasn’t enough mix-n-match for your Black Friday fun, WotC also jumped in on the action with their new hardcover book, The Guildmaster’s Guide to Ravnica. At long last, we’ve got Magic: the Gathering setting material translated into D&D in an official, hardback book.

This is, of course, timed to coincide with the release of the new M:tG set, Guilds of Ravnica. With D&D surging in popularity, expect to see a lot more tie-ins between the two like this. And, if they’re all as meaty as this book, that’s going to be a good thing for DMs and players hungry for more options.

The Guildmaster’s Guide to Ravnica gives players six new races to choose from. These include centaurs (which are fey rather than humanoid, which may be a first in officially published material), minotaurs, goblins, loxodon (hulking elephant humanoids with skin so thick it counts as natural armor and prehensile trunks that, alas, cannot wield a weapon in combat), vedalken (blue-skinned humanoids whose intelligence gives them extra skill proficiencies and greater resistance to mind-control), and the creepy but amazing simic hybrids (magically bio-engineered beings whose enhancements allow even greater customization for the player).

We also get two sub-classes, the Order domain for clerics and the Circle of Spores for druids. But the real meat starts with the guilds.

Ravnica is a massive city that spans an entire planet. Ten guilds dominate the city, and the campaign setting is based around the goals and resources of these guilds. This being the case, each of the guilds is designed as a background for PCs. These backgrounds don’t just give the usual background goodies of skills and gear, but also access to a short list of spells available to anyone with the spellcasting or pact magic abilities. You’ll also get two allies and two rivals, one of each for within and outside your background guild. They also borrow the renown mechanic from organized play and apply it to ranks within the different guilds.

But for me, the best part of the guilds comes in the DM’s portion of the book. Each guild gets a mapped location and a list of adventures that can happen at that location for both allies and enemies of that guild! Combined with information on the goals of the various guilds (including magical items and monsters of particular interest to each), potential enemies and villains, as well as adventure hooks for each of the guilds, and you have what amounts to an adventure construction set for DMs. Stumped for what comes next? There are random tables you can roll to create situations fraught with danger, intrigue, and opportunities for heroic PCs to do their thing. Not sure how to get things started? No worries, the book comes with an adventure for first level characters designed to help you introduce your players to the setting no matter which guilds they pick for their characters.

The book ends with some new magic items and monsters, including M:tG-style angels, demons, and giants. We also get horrors that could potentially inflict madness on the PCs, and of course new vampires and every Green player’s favorite, a wurm. Finally, we get NPC guild members and the guildmaster for each guild.

Ravnica is a more magic-rich and urban setting than 5e’s default Forgotten Realms or Greyhawk. This gives the contents of this book a very different feel. If you’re looking for a way to give your D&D campaign a fresh new spin, or simply want something that feels different, you’ll absolutely want to pick up this book. If you’re looking to run a campaign in a more urban environment, you’ll find lots of tools to help with that as well. And finally, DMs and players who want to add the new races to their games will find value in this book. If you’d like to learn more, talk to the fine folks at your local Dragon’s Lair Comics & Fantasy® about The Guildmaster’s Guide to Ravnica today.