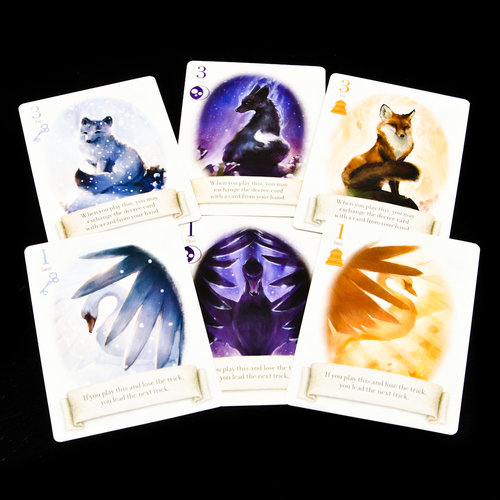 This Fox Has Tricks for Two

There are two neat innovations that make The Fox in the Forest work. First is the deck; instead of your usual four suits, The Fox in the Forest has only three: bells, keys, and moons. And many of the cards have special powers. For instance, if you play the monarch card (the 11), your opponent must play either the 1 of that suit or the highest card of that suit they have. Some cards give you a point if you win the trick. Others can count as the trump suit. Not all cards have special powers, however. The mix is just about perfect to give you interesting options without making the game a chaotic mess. The second innovation is the scoring system. Taking no tricks at all is a viable strategy; if you take three or fewer tricks in a hand, you win 6 points. But take four and you only get 1 point. Take seven to nine tricks and you also get 6 points. But if you take more than nine tricks, you don’t get any points at all! You can win by forcing your opponent to take more tricks than they want.

Typically, you’ll play until one player reaches 21 points, but you can tailor how long you want the game to run by aiming for a higher or lower number. I found a half-hour is a good play time for The Fox in the Forest, allowing you to play through multiple games in an evening. If you love trick-taking games, and most especially if you have a special someone who loves trick-taking games, definitely talk to the friendly folks at Dragon’s Lair Comics & Fantasy® about adding The Fox in the Forest to your collection today.