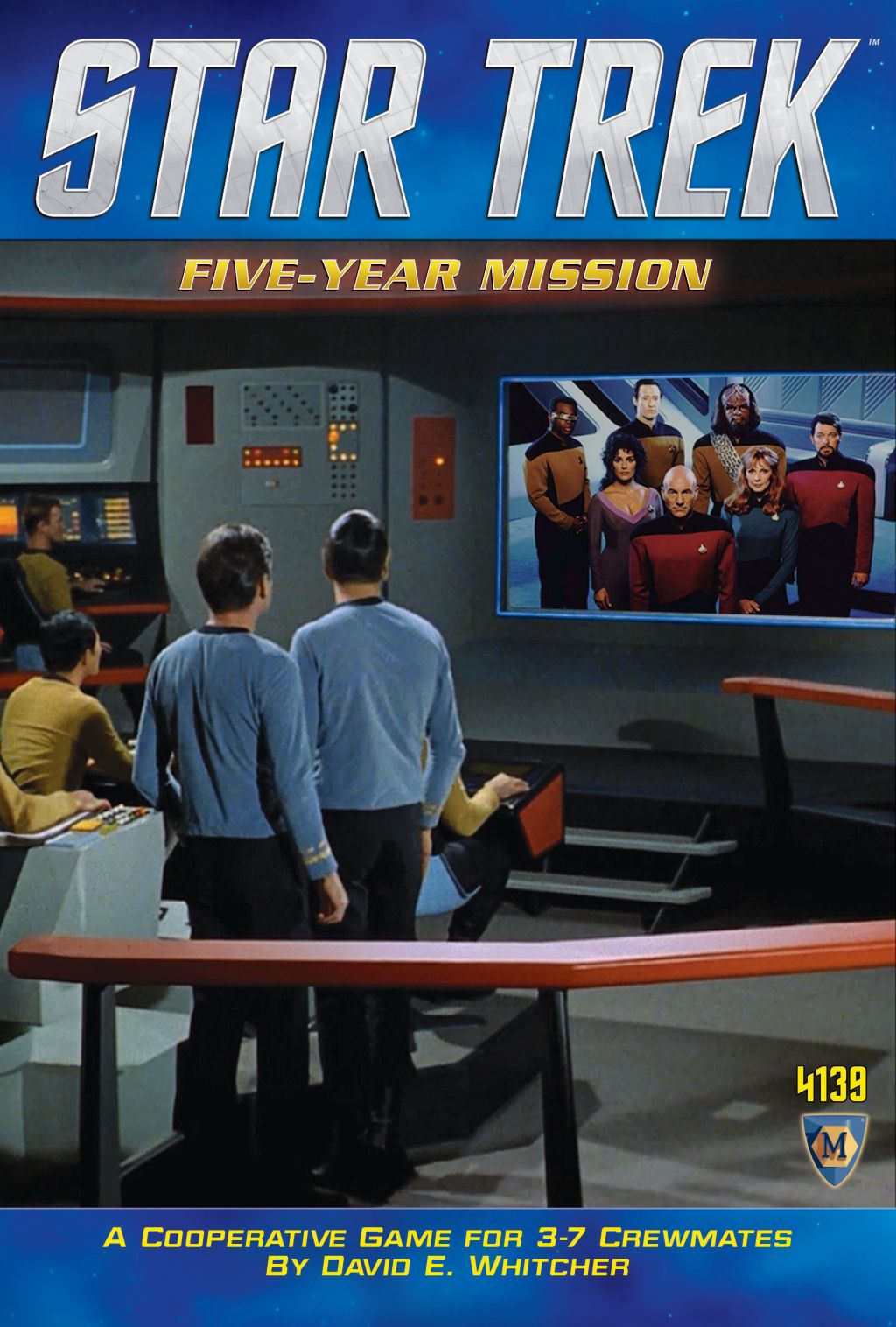 Star Trek: Five Year Mission from Mayfair Games puts you on the bridge of the Enterprise. Which Enterprise? That’s up to you; the first choice you make in the game is whether to play the original series crew (Kirk, Bones, Spock, etc.) or the Next Generation crew (Picard, Crusher, Riker, etc.) Each player picks a bridge crewmember card; on one side you’ll find Kirk and on the other Picard. Each crewmember has different abilities to help you win the game, and these vary between the two crews, so even if you’ve played Kirk before, flipping over to Picard will be a different experience.

Both crews also play with a different deck of cards, though there is some overlap between the two. Each deck is divided into three for Blue Alerts, Yellow Alerts, and Red Alerts. Generally, Blue Alerts are easier to overcome than Yellow Alerts, which are themselves usually easier than Red Alerts, but not always. The most important thing about alerts is that Blues can trigger Yellows which can trigger Reds.

The players work together, rolling dice and attempting to match the number-and-color combos on the cards. Sometimes you can “bank” dice on card, allowing players to slowly fill up the required rolls and remove an Alert from play. Others have to come up on a single roll. Some Alerts have the Prime Directive symbol on them; these you must solve before solving any others. Others are timed; you have just three minutes to complete them. You can also only have three of any one color of Alert active; if you’re forced to draw a fourth, the oldest of the Alerts of that color go into the failed pile. Fail five alerts and the game is over.

Some Alerts cause damage to the Enterprise. Take enough damage and you can only pull Yellow (and then Red) Alerts. If crewmembers take damage, they lose dice (and this can be really exciting if those dice are colors you need to solve Alerts). A doctor character is almost required as they are the easiest way to heal hurt crewmembers and get those dice back into the game.

Some alerts have the Star Trek swoosh symbol on them. Every one of those you resolve earns you a point. To see how well you did, compare the number of points you got with a chart in the rulebook, which ranks your victory on a scale based on Star Fleet ranks.

Star Trek: Five Year Mission is a fun cooperative game for three to seven players. The rules are easy to grasp and play generally lasts half-an-hour to 45 minutes. It makes a great addition to any game closet, but most especially for fans of Trek.