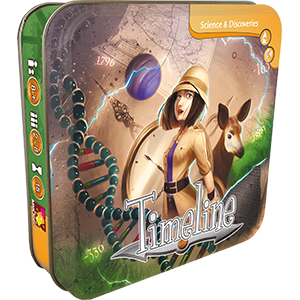 Don’t know much about history? A few rounds of Timeline will fix that. Asmodee’s game of building a timeline from different historical events currently comes in four different flavors with three more in the pipeline.

The game is extremely simple. You start by shuffling a deck of small cards. Each card has an event on one side, and the date the event happened on the other. Events can be things like when the Lewis & Clark expedition set out, the invention of zero, or the discovery of the potato (which isn’t the same as the discovery of the potato by Europeans; that’s a completely separate card).

A hand is dealt for each player and then a single card is placed date-side-up in the middle of the table. That’s the beginning of the timeline. Players then take turns placing one of their cards in the correct spot on the timeline. If the player guessed right, play passes to the next player. If they guessed wrong, they discard the card they put down and draw a new card for their hand. As the timeline fills in, it gets harder and harder to place your cards in the right spot, with some events just being a year off from each other. Which happened first: the invention of photo voltaic cells or the discovery of DNA? The first player to play all their cards correctly wins.

Timeline is quick to learn and quick to play; a game rarely lasts more than 15 minutes, making it a great way to fill time while someone is setting up a more complicated game. The sturdy tins the decks come in are small enough to easily fit in a backpack or a large purse. While the tin says it’s for 2-8 players, so long as everyone can find room around the table, there’s no reason you couldn’t go higher (though fair warning; the more players you have, the more cards will be placed in the timeline and the harder the game gets). Current decks include American History, Americana (dealing with American pop culture) and Discoveries, with Inventions and Music & Cinema coming soon. Ask about them at your local Dragon’s Lair Comics & Fantasy®.