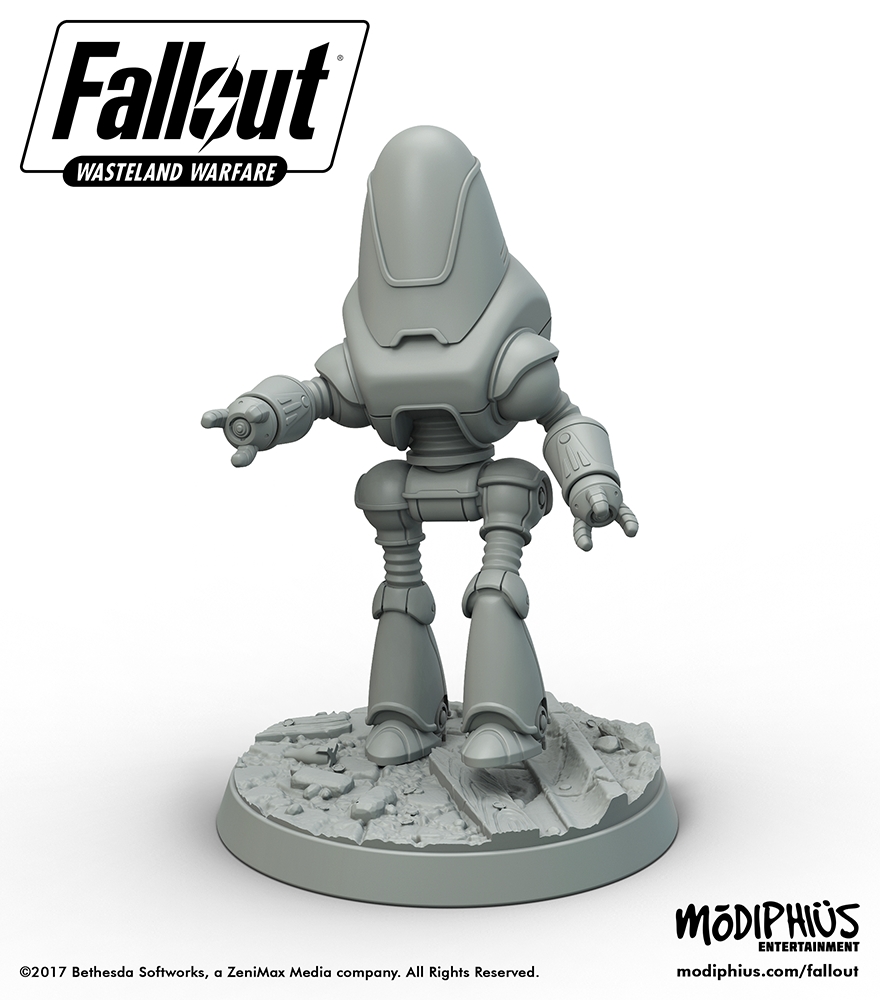 War Beyond the Wasteland Wasteland is probably a computer game reference lost on those under 30, but I’ll bet most of you are familiar with the Fallout series of computer RPGs it inspired. If you’re a fan of the Fallout computer games, you’ve got a new way to enjoy that world coming to your kitchen or game-room table.

Fallout: Wasteland Warfare (See what they did there?) is a tabletop miniatures skirmish game coming out from Modiphiphius Entertainment this year. You’ll put together a team of scrappers based on one of the familiar factions from the game, including Survivors recently risen from a Vault, Super Mutants, Raiders, the Brotherhood of Steel, the Enclave, and the Institute. Some factions can include robots in their teams, which will use a deck of AI cards to dictate their behavior. The various non-aligned monsters (like radroaches) will also come with AI cards, literally making them wild cards on the tabletop. These AI cards will allow you to play solo when you can’t make it out to your neighborhood Dragon’s Lair Comics and Fantasy® for a game, or for co-operative play when you can. Rumor says we’ll get AI cards for the different factions as well, allowing you to play solo or co-op against any models in the game.

These AI systems will come in handy when you play through the various story missions that come with the game, including a linear set in the starter box that will walk you through the rules. Of course, you can just line up your minis and start blasting away at each other as well.

The game uses a unit-by-unit activation system. However, you can also save activations, passing on acting now in order to either have a reaction to what the other player does, or to move multiple units all together. You can use this to build up a massive swarming attack or give yourself extra flexibility to react to the moves of your opponent.

That flexibility can come in handy during the story missions where your figures will not just be shooting at the enemy, but might also be looting suitcases, picking locks, or hacking computers. In one scenario, you’ll be competing against a rival faction to see who can loot a Super Duper Mart of the best supplies the fastest. The game uses custom dice, rather than your normal d6s or d10s. These dice are color-coded; green dice are the most accurate with more hit results while black dice do more damage. Yellow dice degrade the target’s armor, and purple dice give you special ability results. Different gear and units use different dice, giving each a particular edge.

Fallout: Wasteland Warfare promises unique skirmish gameplay in a familiar world. If you’re ready to gird yourself to face the radiated badlands of post-apocalyptic America, ask one of our wargaming experts about pre-ordering the game today.