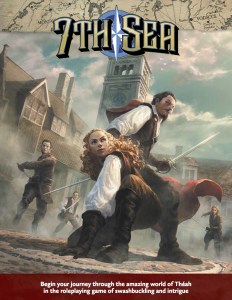 Ok, so GenCon really messes with your sense of time. Things really get rolling on Friday, so much that Saturday feels like things are slowing down. The big climax of Friday is the ENnies Award Ceremony.

The ENnies are a fan-based award for excellence in the RPG industry. Anyone can vote on the ENnies web page based on nominations supplied by a panel of judges. The competition was fierce this year, but certain products clearly rose head-and-shoulders above the competition.

One of those was 7th Sea by John Wick Presents. They took home four silver awards and two golds, including medals for Best Rules and Best Free Product.

Dread High Priest Cthulhu was not to be outdone, however! In spite of mercifully sleeping through most of 2017, His Epic Tentacleness snatched up a shocking seven gold ENnies, including Best Cover Art, Best Cartography, Best Supplement, and Best Production Values, plus another two silver ENnies via his abject and worshipful minions at Chaosium. The Keeper’s Screen and S. Peterson’s Field Guide to Lovecraftian Horrors seemed especially beloved by fans. The Father of the Deep Ones snatched up another gold with Modiphius Entertainment’s Achtung! Cthulhu Skirmish: Servitors of Nyarlathotep. The stars may not have been right, but the fans certainly were pleased. Smaller publishers also did well at the ENnies. Fan favorite Lamentations of the Flame Princess scored two silvers for Veins of the Earth (Best Writing and Best Monster/Adversary) and the Best Adventure gold for Kiel Chenier’s mashup of Willy Wonka and body horror, Blood in the Chocolate. Broodmother Skyfortress also claimed a Judge’s Spotlight award. The big break-out winner, however, was Free League Publishing’s Tales from the Loop – Roleplaying in the ‘80s that Never Was. Based on the haunting art of Simon Stålenhag, if you imagine Stranger Things taking place in Sweden or Boulder, CO and mix in time-travel, robots, and similar weirdness, you won’t be far off. The game secured five gold ENnies, not surprisingly for Best Interior Art, but also dominating in the categories of Best Writing, Best Setting, Best Game, and Product of the Year (beating out 7th Sea which took home the silver).

Congrats to everyone involved, including Stacy Dellorfano, founder of ConTessa and Mistress of Ceremonies for the awards, all the judges, and everyone who was nominated by them. You can, of course, secure all these award-winning games at your local Dragon’s Lair Comics and Fantasy®.