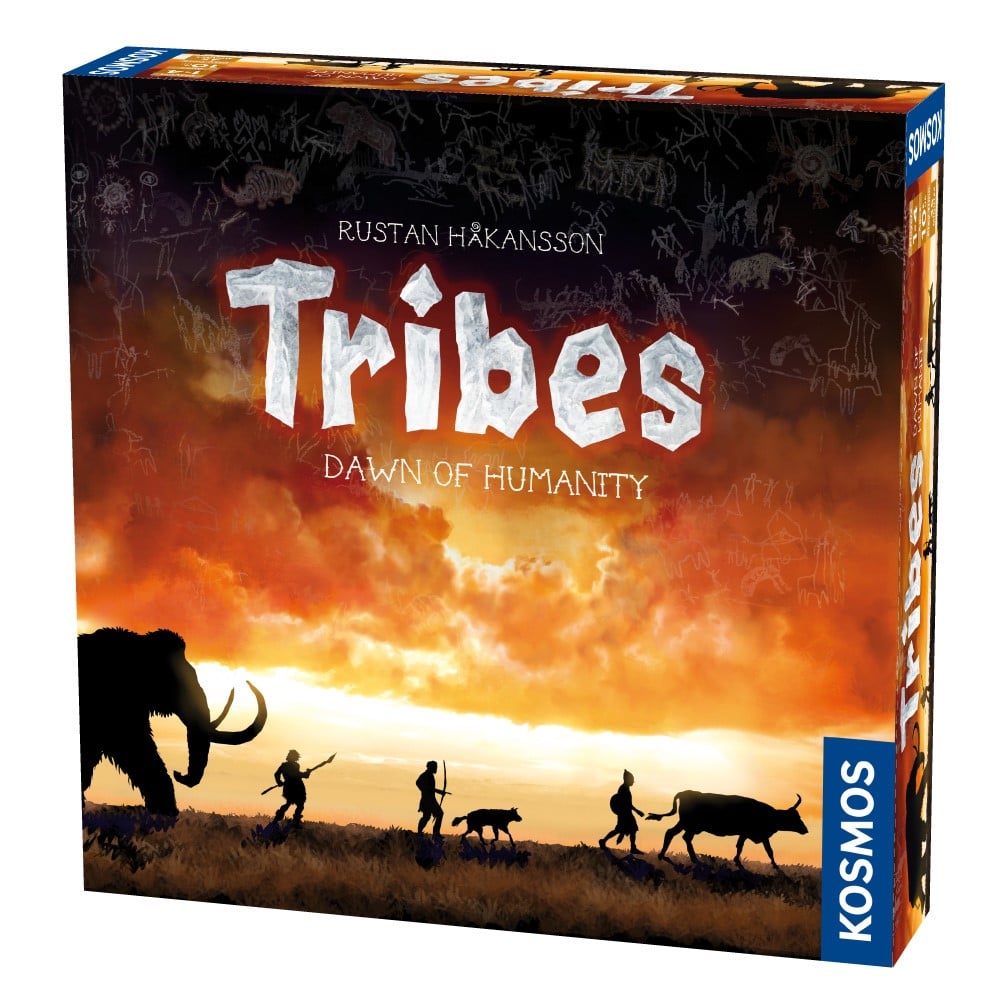 Yep, this is what you think it is: a civilization building game that takes less than an hour to play.  In KOSMOS’ Tribes: Dawn of Humanity, you’ll take your tribe through the Paleolithic and Neolithic eras, up to the Bonze Age through careful management of limited resources and tile placement.

This is a game we got to see at GenCon this year, and it does an excellent job of distilling that civilization-building experience into a game that’s not nearly as complex or time-hungry as most of the genre.  The key to the game is a row of six Action Cards across the top of the board.  On your turn, you’ll take an action by spending your limited collection of Shells by placing one shell on each Action Card to the left of the one you want to take.  If there are any Shells on your chosen Action Card, you claim those as well.  Since you need these Shells, it’s not unusual to find yourself forced to take a less-than-ideal action in order to claim the Shells.  Even worse, there are Event Cards that can have dire consequences for your tribe, such as a disease that kills part of your population.  At some point, you might find yourself accepting the negative consequences in order to claim the large pile of Shells such a card will eventual accumulate.  But wait too long and you might find yourself short of Shells when you really want them to claim an Event Card that gives you extra points towards victory.

How much moving, procreating, or exploring you get to do is based on tracks on the main board.  You advance up these tracks by taking the fourth type of action, Completing an Achievement.  There are three rows of four achievements.  You can complete an achievement if you’ve completed the achievement below it, and you have population on tiles dictated by that achievement.  The achievement itself will tell you which track you advance on.  If you’re lacking the right sort of tiles, you can exhaust a tile that has a population on it by flipping it over and treating it as a one-time wild-tile to represent the needed-but-missing resource.

Completing achievements is one way to earn Victory Points. The number you get is based on the order in which the achievement is completed.  Generally, earlier completions are worth more points than later ones.  Completing some achievements will add Event Cards to the row of Action Cards.

When you’ve completed a number of third-tier Event Cards equal to the number of players in the game, the game is over.  Then you count up your victory points to see who won.  You get Victory Points for completed achievements as well as your advancement up the action tracks.  The player that has the largest population and the player with the most unexhausted territory tiles also get extra Victory Points.

Tribes: Dawn of Humanity is for two-to-four players.  It gives you that explore, expand, and exploit gaming goodness in less than an hour of playtime.  If you’ve shied away from this sort of game due to its complexity and time-commitment, talk to the good folks at your local Dragon’s Lair Comics and Fantasy® today about adding Tribes: Dawn of Humanity to your collection today.