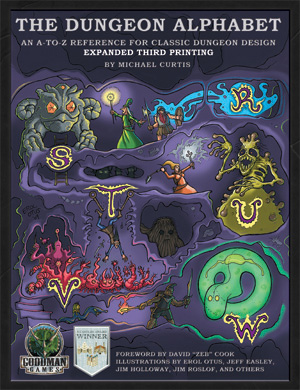 A is for Ankheg

The Dungeon Alphabet is (mostly) what it says it is on the tin. I only say mostly because it’s not the children’s book you could mistake it for.

The book began as a series of blog posts, discussing at least one aspect of designing dungeons for every letter of the alphabet. The result is thin book that’s straight to the point: concentrated imagination-fuel for dungeon masters and designers who need to up their game.

The entries mostly focus on the nouns you find in dungeons: altars, levels, kobolds, etc. Other entries are dungeon-delving strategies like no-stone-left-unturned. Still others, like “weird,” are about setting a tone.

While the book serves best as something to flip through for inspiration while you’re designing your dungeon, it can also be used at the table when the players insist on zigging where you thought they’d zag. Most entries include random tables (unusual rooms, for instance, or the properties of mysterious pools) you can turn to in the middle of the game to fill in details or spark off an idea to improve your making-it-up-as-you-go-along creations. Being both a hardback as well as a slim tome, it exemplifies a new design philosophy in RPG book design that focuses on usability at the table. It’s tough enough to stand up to the spilled soda and Cheetos dust of illicit fortune, but won’t add any serious weight to your backpack or clutter up the table while you’re using it.

Put out by Goodman Games and sporting black-and-white art, The Dungeon Alphabet clearly has one foot in “old school” sensibilities, but you won’t find any descending armor class here. In fact, you’ll find nary a stat in the whole thing. Instead, this book is about ideas, puzzles, neat features, setting the mood and amazing your players.