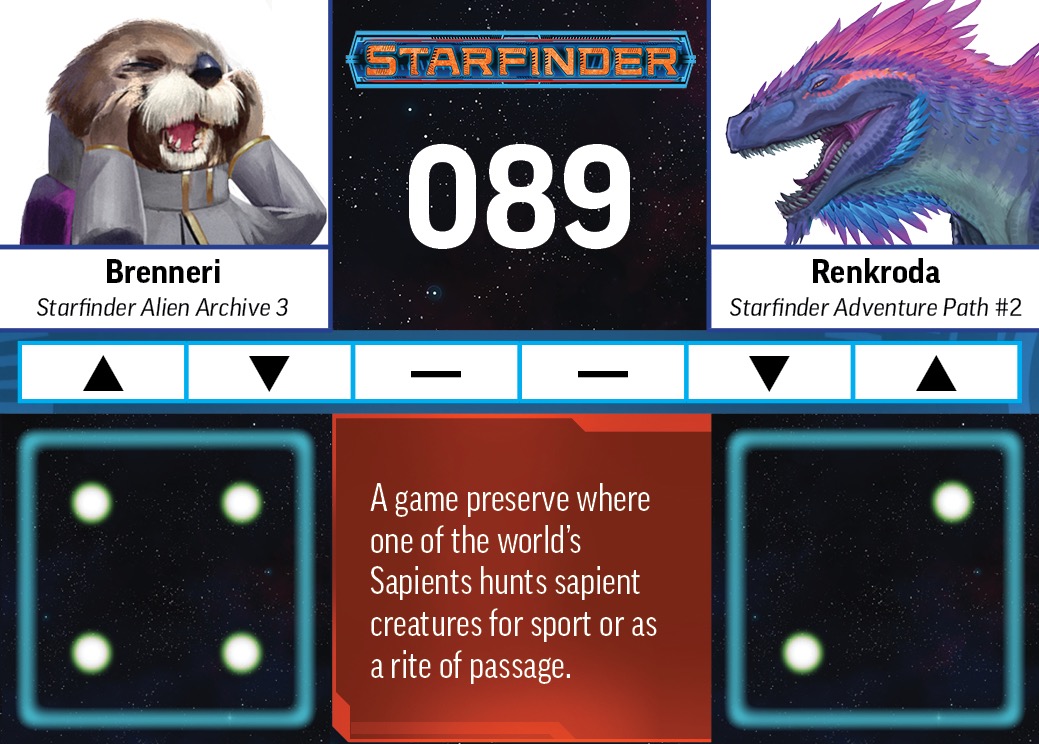 A Million Worlds are in the Cards

Among the most common challenges for the Game Master of a world-hopping sci-fi RPG is coming up with new worlds for the PCs to explore.  This is especially true when the players zig when the GM expected them to zag.  Time to order pizza and for the GM to wrack their brains trying to come up with something that doesn’t sound too much like the latest episode of everyone’s favorite sci-fi show.

If this is you, Paizo is coming to your rescue with the Deck of Many Worlds.  A deck of 100 cards helps you create a world with surprising (and useful) detail in minutes, allowing you to scarf down your share of the pizza and be ready to pick the game back up once everyone’s hunger is sated.

You’ll draw five cards to create a single world.  Arranging the five cards just so will give you the type of world it is (things like gas giant, terrestrial world, water world, lava world, etc.), a piece of art representing that world, the physical traits of the world (things like gravity, atmosphere, and biomes) as well as six cultural traits, things like how the world in general fits on the law-chaos and good-evil axes, the dominant culture’s relationship with religion, and their access to magic and tech.  Your layout will also define the principle sapient race as well as a threat species to serve as potential antagonists (or possibly just a complication for the PCs).

My favorite part is the story hooks.  Each world gets two from a standard array and these range from the immediately intriguing (“The site of the start or finish line for a high-stakes… starship race”) to the mind-boggling (the inhabitants are the reincarnated souls of those who die on another world!)  There are classics (“Hugely overpopulated with sapient creatures crowding every habitable space, making resources scarce.”), mercantile lures for murder-hobos and wheeler-dealers (“Rich in natural resources or a rare starmetal.”), challenges (“Strewn with large, permanent zones in which magic, technology, or neither functions.”) and mysteries (“Littered with the accumulated fossils, refuse, or ruins of countless civilizations, each preserved in distinct layers.”)

But wait, there’s more!  You can also use the deck to inspire NPCs and even PCs.  You can use the cards to create individual settlements on a world or entire star systems.  And, of course, if you need more inspiration, you can always draw more cards, shuffle around aspects, and flip things as your muse moves you.

While the Deck of Many Worlds is designed for the Starfinder RPG, pretty much any sci-fi game that involves a lot of planet-hopping (such as Star Trek, Star Wars, or ALIEN) can get a lot of use from these cards.  GMs who find themselves needing to frequently create planets on the fly will especially find this deck extremely useful, and a faster alternative to setting-creation than flipping through a book and rolling on tables.  Talk to the masked experts at your local Dragon’s Lair Comics and Fantasy® about getting the Deck of Many Worlds in your hands today.