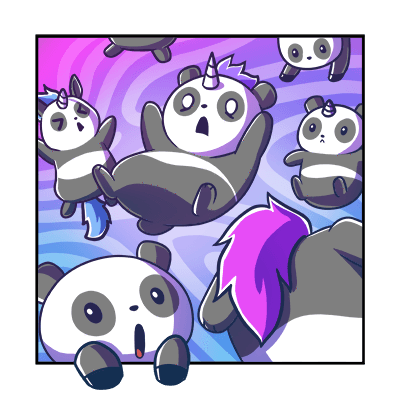 A Stable of Unstable Unicorns Unstable Unicorns is a game from the creators of teeturtle, the folks who make those adorable and geeky t-shirts. The game is just as adorable as you’d expect, knowing that, but it’s also in the same vein as other darker party games like Exploding Kittens. The core pack has its share of dark humor but is otherwise safe for work. There is, naturally, a NSFW expansion pack if you want to go full Joking Hazard with it.

That said, this is not a reskinned version of Exploding Kittens. Where that game is built around a push-your-luck Russian-roulette mechanic, Unstable Unicorns is more of a deck-building game. The goal is to be the first player to get a certain number of unicorns in your stable (how many depends on the number of players). Each player starts with a single baby unicorn in their Stable (face up on the table in front of them). All the rest of the baby unicorns are placed in the middle of the table; this is the Nursery. You also have a draw pile and a discard pile. During your turn, you draw a card, and then you can play a card or draw a second card. Then you have to discard down to seven cards if you have more than that number in your hand.

Before you do any of that, however, you activate any affects you have from the cards you have in your Stable. Some of the cards in your Stable will be unicorns. Unicorns come in three flavors. Basic Unicorns are just that: a unicorn with no special rules or abilities that still counts for scoring purposes. Baby Unicorns are just like Basic Unicorns except any effect that would normally remove them from play moves them to the nursery.

Magical Unicorns, however, have special rules or abilities. Most involve searching the deck, discarding or moving cards in other players’ stables, or adding new cards to your own. There are also upgrade and downgrade cards like Slowdown that prevent you from playing instant cards or Extra Tail that allows you to draw an extra card so long as you have one Basic Unicorn in your Stable. Probably the most important card in the game is the Neigh which allows you to counter any card played and send it straight to the discard pile before it takes effect. You can play a Neigh at any time, even to Neigh a Neigh card played on you! However, the single Super Neigh in the game cannot be thwarted this way.

Unstable Unicorns is an extremely attractive game, with adorable art, a magnetically sealing and sturdy box, and multiple “What To Do On Your Turn” cards to remind you of the game’s rules. It’s designed for 2-8 players, making it an extremely flexible addition to game night, and games rarely last longer than a half-hour. This makes it perfect for impromptu game nights, taking on trips, or as a filler while a more complex game is set up. Ask the unicorn experts at your local Dragon’s Lair Comics and Fantasy® about starting your own stable of adorable and sadistic unicorns today!