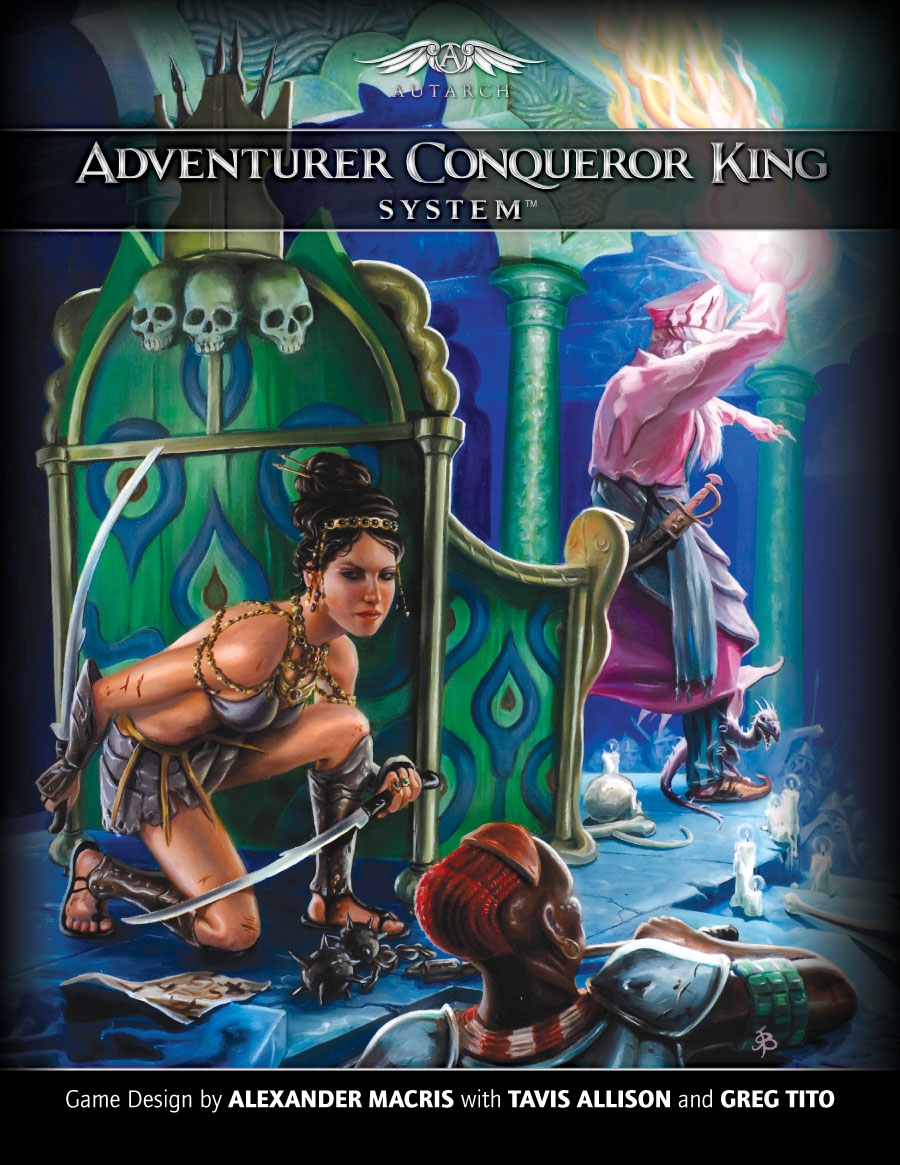 Adventurers, Conquerors, and Kings All Most RPGs with hard leveling systems have a sweet spot, a range of levels where the game performs best. In D&D that’s generally perceived to be from about level 4 or 5 through 8 to 12, depending on which edition of the game you’re playing. The Adventurer Conqueror King System (abbreviated ACKS) is an attempt to build a D&D-style RPG without the sweet spot, with fun and engaging play across the full spectrum of levels.

ACKS is a second-generation Old School Renaissance game. Unlike the first generation of games, often called “retro-clones,” the second generation wasn’t just an attempt to reproduce the games of TSR-era D&D. While these second-generation games are clearly built on a D&D chassis, each has additional aims that require deviation from “pure” reproduction of those games of yore.

In the case of ACKS, the goal was to make a game that was fun to play through the full range of levels. This was accomplished (and quite well, I’ll add), by embracing three tiers of play. At the lower levels, the Adventurer tier, you have your traditional low-level D&D play: exploring ruins, recovering treasures, and fighting kobolds, goblins, and carrion crawl-, oops, I mean carcass scavengers. The mid-tier, Conqueror, has the PCs getting involved in the politics of the campaign world. Eventually, surviving PCs will rise to rub shoulders with the world’s movers and shakers, the King tier.

To be honest, while the tier system is neat, it’s not the best part of ACKS. The best part is that they cleaned up high level play. If you’ve played 3.x D&D at levels beyond 12, you’ve certainly seen how the game starts to fall apart. This goes far beyond combat, especially with clerics who can literally create vast amounts of wealth and shatter economies without working up a sweat.

Fixing these issues has required a pretty serious overhaul of the traditional D&D spell system. Those of you who hate Vancian magic, where wizards prepare spells in advance, will be happy to see that it’s gone from ACKS. It’s replaced by a fairly simple spell-point system. Which spells are at which levels has also been juggled about a bit.

One holdover from early TSR-era D&D that might rub folks the wrong way is race-as-class. That is, one does not play an elven fighter or dwarven thief, but instead must choose: elf or fighter, dwarf or thief. The authors did this because they didn’t want race to simply be a series of +1 bonuses and the ability to see in the dark, but to be far more core to the experience of playing a non-human character. That said, the game includes two different dwarven classes and two different elven classes for play.

Another high point of ACKS is the Secrets chapter at the end of the book. It’s full of advice for Judges (aka DMs) who want to run a sandbox style campaign. Sandbox campaigns give the players the widest latitude in deciding what sorts of dangers and adventures they want to tackle each session. That sort of play, however, can be daunting to run. ACKS gives you the tools, advice, and hand-holding you need to pull it off successfully.

The core book is professionally laid-out and comes in both paperback and hardback forms. The interior black-and-white art is appealing, but most pieces aren’t going to knock anyone’s socks off. It includes both a table-of-contents and a decent index in the back.

If you’ve been curious about this whole Old School Renaissance thing, ACKS would be good game to explore it with. It retains the feel and style of those old games even after jettisoning many of the mechanics that turn people off, like Vancian magic, THAC0, and descending Armor Class. It’s a great introduction to running sandbox campaigns. It also delivers on its promise, giving you the tools you need to play a game where the PCs command entire faiths, guilds of thieves, and even empires.