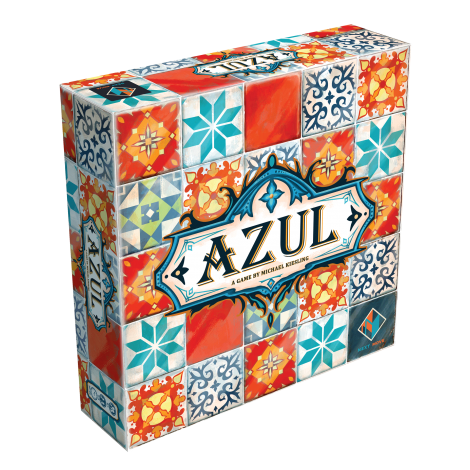 If you pay any attention to the international board gaming scene, then you’ve heard the name Azul already. Winner of board gaming’s highest award, the Spiel des Jahres (“Game of the Year”), as well as the Origins Awards’ Best Family Game, Azul has garnered a lot of positive buzz and already created a spin-off game. So what’s all the excitement about?

Azul is an abstract game of laying tiles. The lovely tiles come in five different patterns. Each player starts with their own board. On the right side is a five-by-five array of the patterns arrayed so that each row has only one of each pattern. On the left is your prep area, five rows with the top row having only a single space, and each row below sporting one more than the row above, until you reach the bottom row of five spaces.

In the center of the table are five “factory floor” circles arranged in a pentagon. Each circle will be filled with four tiles drawn randomly from a bag. In the middle of the pentagon a single “1st Player” tile is placed.

Once the game is set up, players take turns drawing all the matching tiles from a single factory floor circle. Any tiles in that circle not matching the picked tiles are moved to the center with the “1st Player” tile. The chosen tiles are placed on one row of the prep area. Only one pattern can be placed in each row (though a single pattern can be used in two different rows). If you end up taking tiles that you can’t place, they go into a penalty row at the bottom of the board; these will cost you points later.

The player forced to take the “1st Player” tile adds it to their penalty row at the bottom. Once all the tiles have been taken, players get to place one tile on the array for every prep area row they completely filled. The remaining tiles on that row get removed from the game. Then players count up their scores. You get points for each tile you place on your array, but you get more points if there are other tiles adjacent either horizontally or vertically to the tile you placed. After you count up the points you earned, you then subtract points based on the tiles in your penalty row.

Then you replenish the factory floor circles and the player who took the “1st Player” tile gets to go first. Play continues until one player fills out a horizontal row on their array. Players get bonus points for each row, column, and pattern that is completely filled in. The winner is the player with the most points.

To finish a full game usually takes a bit more than a half-hour. Azul can be played by 2 to 4 players. It’s really easy to see why this game is so popular. It’s a simple competitive brain-teaser with multiple paths towards victory. Do you concentrate on getting every space of a particular pattern full? Or maybe you concentrate on columns. You could play the spoiler, picking tiles in order to deny other tiles to your opponents. If that sort of interactive brain-teaser appeals to you, head down to your local Dragon’s Lair Comics and Fantasy® to secure your copy of Azul today.