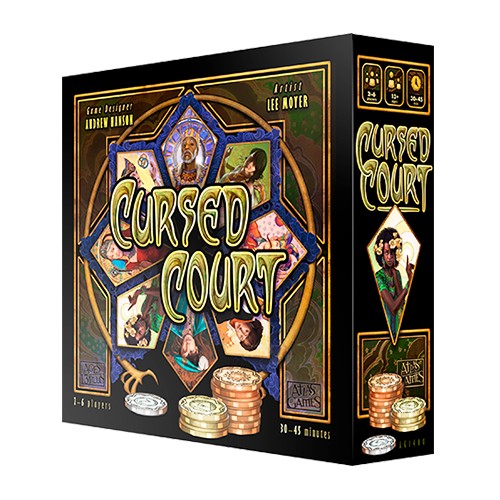 Betting and Bluffing in the Cursed Court Atlas Games’ Cursed Court was a big hit at the GAMA trade show this year. The game came out late last year, so I hadn’t had a chance to play it yet. I ended up spending a lot more time with the game than I’d planned because it’s both fascinating and fun.

At its core, Cursed Court is an area control game. The game board is a nine-by-nine grid of the most powerful courtiers in the land. A deck of 36 cards with the same courtiers on them (four of each) are shuffled and one card is dealt between each player. You get to see the cards on either side of you, but not any of the others. Then a single additional card is placed face up for everyone to see.

You can also bet on groups of cards showing up, such as all the cards in a single column or row, clusters of four, or horizontal runs across the board. You only get points if all the cards in the group are played, and you get one point per card in the group (that is, if you bet on a row of three cards, you get three points so long as all of them show up at least once, and nothing extra if one card shows up multiple times).

You mark your bet by placing a crown on its space. Each space representing a bet can only hold the bet of a single player. That’s where your 20 coins come in. You can protect your bets by placing coins on them. To knock you off a bet, another player has to place twice as many coins as you put down to claim the bet. Once everyone has one bet on the board, a new card is revealed face-up to everyone. Rinse and repeat until everyone has two, three, and finally four bets on the board. Then you reveal the hidden cards and total up everyone’s bets. Do this three times to complete a full game. The player with the most points wins.

The game is very easy to learn and turns move fairly quickly. Analysis-paralysis isn’t as much of an issue in this game because players can plot their moves while the other players are placing their bets, though some groups may want to put a time limit on turns.

Of course, with a game like this, bluffing is common; tricking others into thinking the Jester is in play (or even has multiple cards in play) to lure them into bad bets is a viable strategy. The final reveal of which cards were really in play and totaling the points frequently makes you eager to play again. The game also comes with a number of variant rules to keep it fresh.

The art for the game is lovely and the playing pieces are a lot of fun, especially the poker-like betting coins. Cursed Court can be played by two to six players, and running through a full, three-round game takes 30 to 45 minutes. Ask for it today at your local Dragon’s Lair Comics and Fantasy®.