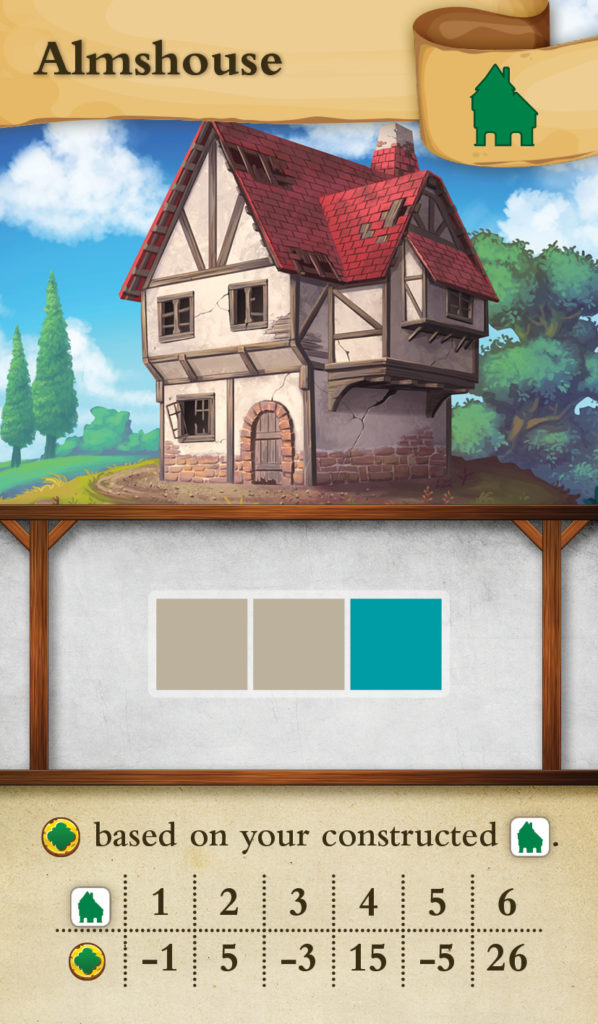 One of the big hits at the GAMA Trade Show this year was AEG’s Tiny Towns, a competitive city-building strategy game. The game is fun and quick, but the interactions of the pieces give you a dense layer of strategy that’s different every game due to a random setup.

Each player attempts to earn the most victory points by building the best town. You start the game by finding out what sorts of buildings you can make. There are eight different kinds of buildings you can construct, each represented by a uniquely colored and shaped playing piece. Each building has its own pattern of resources necessary to build it and a unique way of scoring points for you. The blue cottage is always the same in every game. Six of the other buildings have four versions, and you’ll draw a card randomly for each to learn which version you’ll be using in this game. Everyone at the table can build any of these buildings.

The final eighth building is a purple monument unique to your village. Each player will draw two from the deck of monument cards, look at both, discard one and keep the second face down so only they know what it is.

The first player to Master Builder picks any of the five resources and announces their pick to everyone. Each player must take a cube of that resource and place it on one of the squares in their play board. The player on the Master Builder’s left becomes the next Master Builder, picking the next resource everyone will add to their board.

Placement is vital to scoring. Some buildings get you more points based on their location or how many you have. Others create synergies, boosting your score if another building is nearby or based on the other buildings in that row. The Almshouse gives you a lot of points if you build an even number of them, but lots of negative points if you build an odd number, creating a push-your-luck element if it’s in play. Other buildings allow you to manipulate the resource cubes. Your unique monument building will often allow you to do things like rearrange your board or swap out buildings.

You play until you can’t place any more resource cubes on your board. Once everyone is out, you tally up your scores. Every space on your board holding a cube and no building is worth -1 victory points. The highest victory point total wins the game.

Tiny Towns is a game for two-to-six players. Each game lasts a half-hour to 45 minutes. It’s got elements of games like Bingo and Cathedral in it, with that extra layer of placement strategy that will make you want to play again to see how things change with a different configuration of building cards. Since everyone plays simultaneously, there’s no waiting for your turn, and if you’re the first person out you rarely have to wait more than a handful of minutes before the game is over. Tiny Towns is an excellent addition to your collection, a flexible and quick game that can serve as a filler between other games, but most groups will probably want to play it multiple times in a single evening. Talk to your good neighbors at Dragon’s Lair Comics and Fantasy® today about becoming the mayor of your own tiny town.