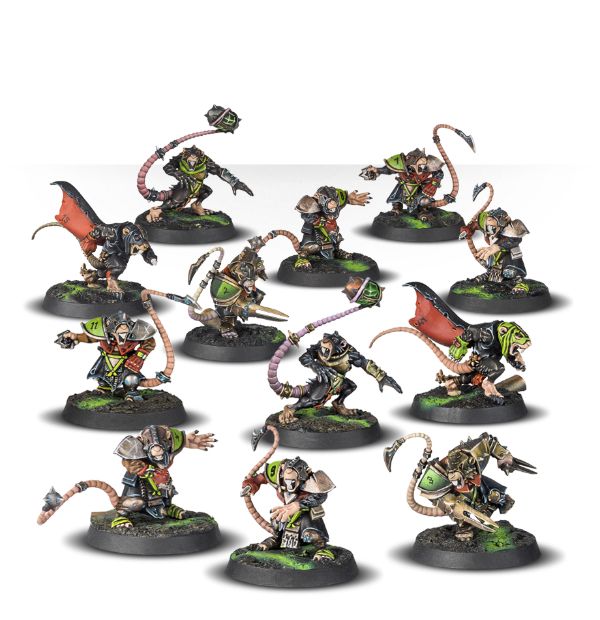 Blood on the Gridiron: Blood Bowl is Back! If you eschew typical fantasy football for its lack of gore, brutal beat downs, and sharp, stabby spikes, then Blood Bowl is the game for you. Yes, once again, Games Workshop has plumbed their history to bring us some gaming goodness from days gone by. This time, it’s the stand-alone send-up of American football that is Blood Bowl.

In this game, you’ll play the part of a team coach. As Blood Bowl takes place in the world of Warhammer Fantasy, teams are made up of one of the classic races like orcs (brutal and hard-hitting), dwarves (slow but tough), skaven (sneaky and fast), and humans (your general all-rounders). Your team is represented by figures you place on the gridded board. You must place three players on the line of scrimmage, and no more than two in the outer zones of the field. The rest you can place how and where ever you prefer.

The rules are far simpler than football. There are no downs or field goals. Your players can move, block, blitz, and tackle, and you do this by rolling dice and comparing what you rolled to the involved players’ stats. Each player has four: MA (Move Allowance), how far a player can move; ST (Strength), how hard a player hits; AG (Agility), how well the player handles the ball and avoids getting hit; and AV (Armor Value), how hard it is to injure a player.

Roll well, and you move the ball towards your opponent’s end zone. Roll poorly and you could suffer a turnover. If that happens, your turn ends and the other player gets the ball. Injuring or maiming players takes them out of the game (or even, potentially, life) which is bad enough in a single game but can be brutal in League play. League play is basically a single-season campaign where your team and players can accrue wealth and experience, but a loss on the field or the death of a star player can turn triumph into tragedy.

As in football, the goal is to get the ball into the other player’s end zone. Do that, and you score a point. The team that scores the most touchdowns wins the game.

Blood Bowl can be a fast-moving game, especially compared to most wargames. It requires a lot fewer minis to play as well. If you’re looking for something of the flavor of the old Warhammer Fantasy game without the time-and-money investment of that game, you should give Blood Bowl a look. If you’re a fan of fast-moving skirmish games with simple rules but lots of tactical potential, you should give Blood Bowl a look. And most especially if you think the NFL doesn’t allow enough spikes and decapitations in their games, you should absolutely get your hands on this game yesterday.