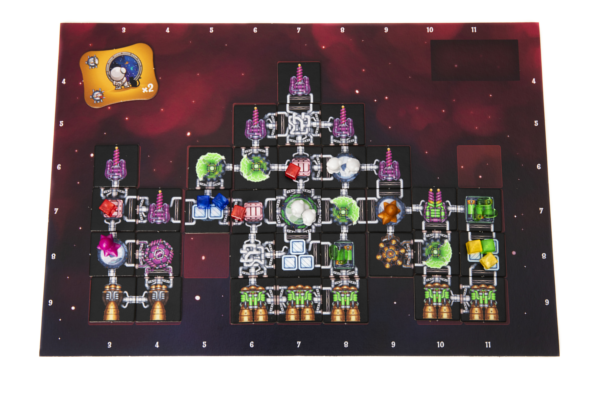 Galaxy Trucker is back and (unlike the ships you’ll build in the game) sleeker than ever.  If you’ve taken a look at Czech Games Edition’s game of building and then smashing starships and found it a bit too clunky and requiring too much of a time commitment, you’ll want to give this new edition a look.

For those not familiar with this gleefully destructive game, Galaxy Trucker is a game of building starships, flying across the universe looking for opportunities to make cash, and hoping your ship isn’t torn completely apart in the process.  Among its virtues is that a lot of the game is simultaneous, so you won’t be sitting around waiting for your turn much.  This is a real bonus for players with shorter attention spans.

You start the game by laying out all the ship part tiles face down on the table.  Then each player takes one of the identical ship layout cards.  On one side is a small ship (the blue one) and on the other side is a medium-sized ship; opening the card reveals a massive red ship.  Everyone plays with the same size ship.

Once everyone is ready, you flip over the sand timer and everyone, all at once, begins turning over tiles and adding parts to their ship.  Every tile you don’t put on your ship goes back onto the table, face-up and available for any other player to claim.  Each part has up to four connectors (one on each side of the square tiles) and each connector comes in one of there flavors: a single, a double, or a universal.  Singles and doubles can only connect to identical connectors while the universal can connect to all.  You can’t have any unconnected connectors inside your ship, while connectors leading to the outside of your ship create weaknesses that might be a problem as you navigate the spaceways.

Engines make your ship go faster and must be pointed backwards.  Guns can be pointed in any direction, though forward tends to be the most useful.  Cargo pods allow you to haul different types of color-coded cargo and each crew module allows you to add two more astronauts to your crew.  There are shield generators that can each cover two sides of your ship, but require batteries to function.  These batteries can also power bigger guns and engines.

When the timer runs out, it’s time to put your ships and crews to work.  You’ll assemble a deck of event cards based on either the size of your ships or the scenario you’re playing.  (The game comes with a great introduction scenario to help you learn the rules.)  Then you’ll arrange your ships along a track based on how many engines each ship has, with the most in front.  Being in front is a mixed-blessing; it does allow you to take first advantage of opportunities to acquire cargo and credits, but it also means you get hit first with dangers.  You might find yourself clearing the way for those coming up behind and paying for the privilege by seeing your ship smashed apart by pirates.

If you’re unlucky, your trip could end prematurely if you lose all your engines or crew.  Otherwise, your journey ends when you play the last card in the event deck.  Your score (in credits) is tabulated by who came in first, who has the fewest exposed connectors, and what cargo you were able to transport.  You might also have collected bounties on pirates or acquired credits while on the journey.   Every ship that completes the journey with a profit is a winner, but the winners are ranked by who acquired the most credits.

Galaxy Trucker is a fun, fast-paced game that lets you build starships and then smash them apart in an intergalactic demolition-derby with asteroids and space pirates.  Younger players and those with less time to play will enjoy the simultaneous nature of most of the game while the strategists in your gaming crew will puzzle over the optimal ratio of ship modules.  If you enjoy games that include visual puzzles, keep the action constantly coming, and have paths to victory for both the quick and the clever, talk to the Galaxy Patrol officers at your local Dragon’s Lair Comics and Fantasy® today about starting your career as a galaxy trucker.