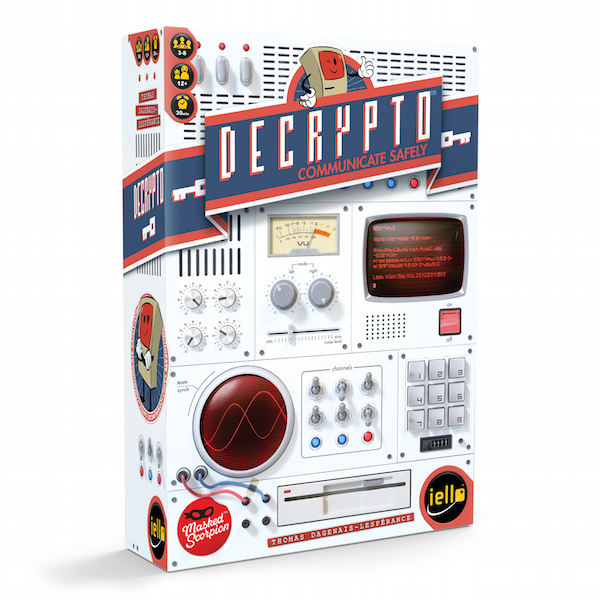 Decrypto from iello is a fun party game with a playful Cold War code-breaking theme. If you’re a fan of games like Codenames, you’re going to want to check Decrypto out.

Players split into two teams, each with its own code screen. The screen (shielded from the eyes of the opposing team) holds four cards, each with a word on it, in slots labeled 1 through 4. One player draws a code card that will list three numbers between 1 and 4 in a particular order. That player then says three words that reference the words on the screen to try to get their team to guess the right numbers in the right order. For instance, if the code card says “2, 4, 3” and the words on the screen are “1: Train, 2: School, 3: Apple, and 4: Australia,” the clue-giver might say something like “teacher, kangaroo, pie” for their clues. If their teammates fail to guess the numbers, their team gets a failure token. Then the other team does the same.

Play continues until one team has collected two failure tokens (meaning they lose) or two success tokens (meaning they win). Rounds go fast with everyone involved all the time, making this an excellent party game. It also has that “just one more go” appeal that will keep this game at the top of your game closet.

Decrypto is designed for three-to-eight players. Rounds go by fast, so it’s rare for a game to last more than 30 minutes. However, if you do have some folks who take more than their fair share of time to put together a guess, there’s a 30 second sand timer included to speed things up. The official street date for Decrypto is April 19 but your neighborhood Dragon’s Lair Comics & Fantasy® will be getting the game in early March. Ask about pre-ordering it today.