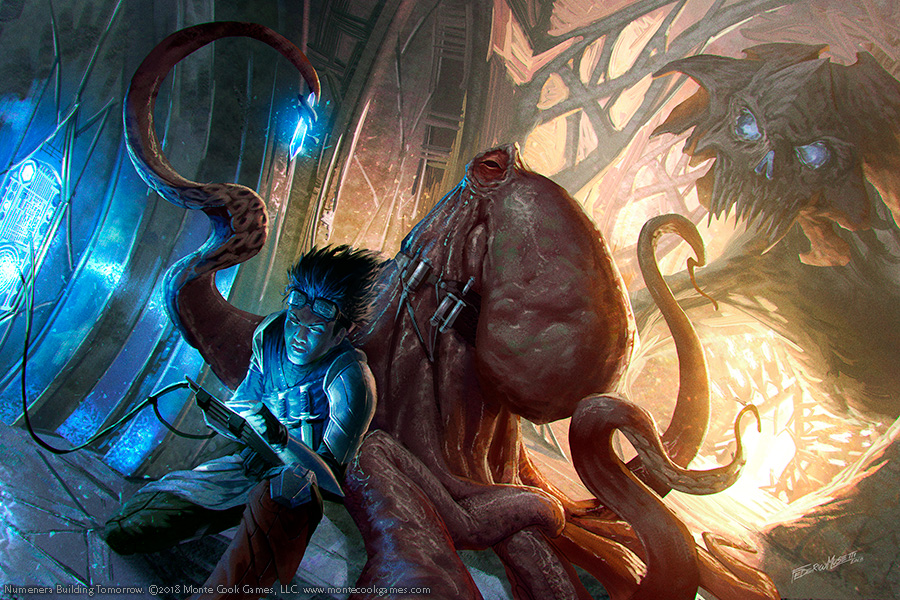 2018 has been a momentous year for Monte Cook Games. They’ve published fiction for their game worlds, released new settings for their Cypher System RPG, and published a brand new RPG in Invisible Sun. But they still had time to shower some love on the RPG that started this current era for the company, Numenera.

This year we saw the publications of Numenera: Destiny and Numenera: Discovery, reworkings of the core rules that are fully compatible with the original version but offer new avenues of play. Now Bruce Cordell and Sean Reynolds follow up on the promise of Numenera rebooted with Building Tomorrow, a book that takes full advantage of these new options for GMs and players.

While the numenera that give the game its name, ancient technology of mysterious origin and, often, even more mysterious purpose, remain enigmatic, players can now use bits of ancient technology, called iotum, to build new numenera for themselves and their communities. With the proper plans in hand, a PC, especially a Wright, can construct tiny devices, automata, vehicles, and even massive installations. These plans are part blueprints and part recipes, often requiring characters to go on quests to acquire all the necessary iotum. Building Tomorrow gives GMs and players 69 pages of these recipes to use in their adventures, as well as additional cyphers and artifacts, two things a Numenera GM can’t have enough of. The book also introduces a number of non-human followers to help the PCs out in their quests, including one of the mysterious octopi of the oceans. These will greatly expand the options and potential of any Arkus characters in your campaign. We also get a dozen new forms of iotum for harvesting and suggested GM intrusions for crafting (usually an odd but not debilitating side-effect of using or having the crafted cypher).

Finally, we get wastelands, terrain and places corrupted or transformed by numenera “leaching weird energy or materials into the air and soil.” Some numenera might be failing due to a lack of regular maintenance, some might actively be engaged in terraforming the surrounding landscape, and some might be affecting the environment simply from what they are. In any case, these wastelands provide unusual challenges to the players while offering excellent opportunities for collecting new cyphers and harvesting iotum.

Building Tomorrow takes the new toys we got in Destiny and Discovery and gives us cool ways to play with them. If you’ve not heard about Numenera before, or you’re an old hand looking for new ways to play, talk to the RPG experts at your local Dragon’s Lair Comics and Fantasy® today about what the game is like and what it offers for your RPG fun.