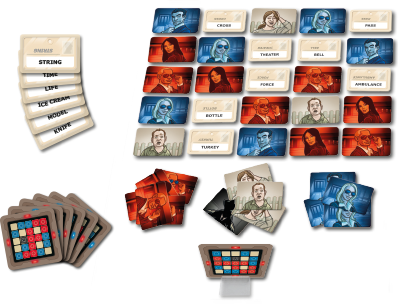 Can You Guess the Codenames? Vladimír Chvátil might not fall trippingly from your tongue, but in the world of board games, his is a name to conjure by. His list of triumphs includes SpaceTruckers, Bunny Bunny Moose Moose, and Through the Ages: a Story of Civilization (which won him Best Game in the General Strategy Multiplayer category at the 2007 International Gamer Awards). His latest game is Codenames, and it was a huge hit at GenCon last year.

The game is deceptively simple: an array of 25 words is put down on the table. Two players, rival spymasters, know which cards are friendly spies, which are enemy spies, which are innocent bystanders, and which is the dreaded assassin. The spymasters are only allowed to say two things: a word that isn’t on any of the cards but should point the players to cards that are friendly spies, and the number of guesses they get. The players on that team then point to a word card. If it’s a friendly spy, they get to go again. If it’s an enemy spy, the other team gets the point. If it’s an innocent bystander, their turn ends and the other team gets a go.

And if they pick the assassin, they lose!

As you can see, the spymasters have their work cut out for them. Trying to find words that will reveal as many friendly spies as possible, as few enemy spies and innocent bystanders as possible, and absolutely avoid any association with the assassin, is tough. But it makes for an incredibly fun game.

Codenames is a game for 4 or more players, but really sings with a group of six to eight. It takes five minutes to set the game up and 15 minutes to play. If you pull this one out at board-game night, you can easily get in a handful of games in the space of an hour. But don’t be surprised if everyone’s stilling having fun with this one ten games into an evening.

UPDATE: 06/02/2016
Via ICv2 we learn that Czech Games Edition has announced they are releasing a new spin-off of this game to be called Codenames: Pictures. This will be a picture-matching game. Attendees of GenCon 2017 will be the first to see the final version.