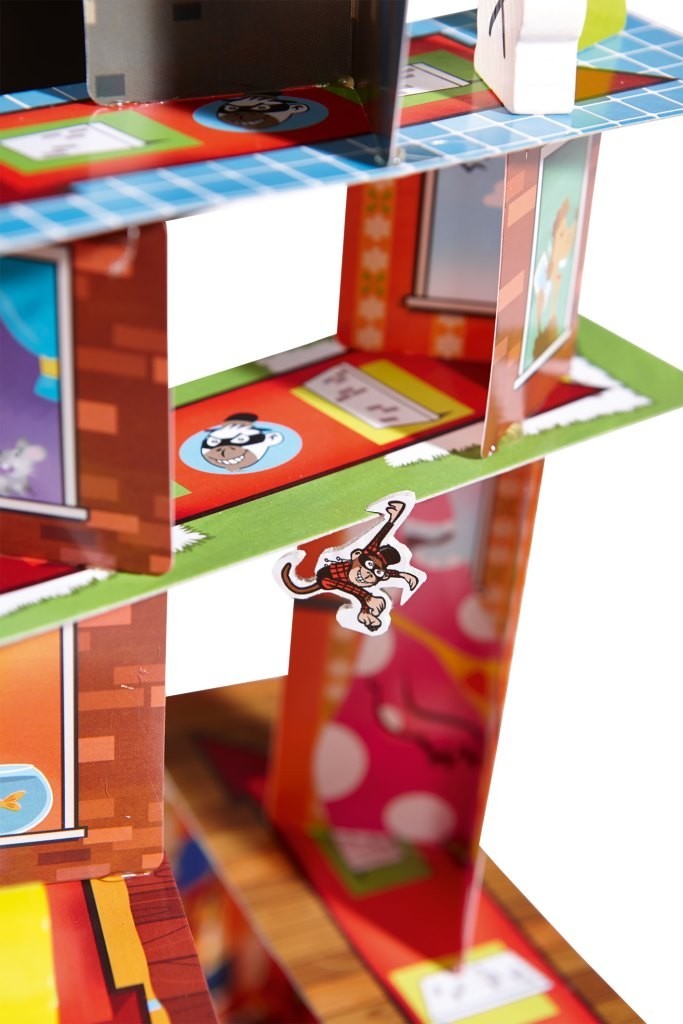 Climbing Up and Falling Down with Rhino Hero Super Battle While HABA’s Dragon Tower may have been the cutest game at GenCon this year, it wasn’t HABA’s newest game. That distinction belongs to Rhino Hero – Super Battle. If you’re familiar with the original Rhino Hero game, Super Battle is like that only bigger, bolder, and more interactive.

Like Rhino Hero and Dragon Tower, much of Rhino Hero – Super Battle involves constructing a building out of bits of card. Rhino Hero Super Battle gives you three bases to build on at once, rather than just one, so you get a more sprawling building. In addition, with different wall heights you can have floors that jut out beneath other floors, allowing for the creation of overlapping designs.

You also get three new super heroes in addition to Rhino climbing your building. On your turn, you take one of your three floor tiles. Each floor tile tells you what walls it comes with and how many. You use the walls to build supports for your floor and balance your floor on them. If the floor also has a spider monkey symbol, you’ll need to hang one of the wooden spider monkey pieces from the building somewhere.

Then you roll a die. If you get a number, you get to ascend that many levels in your building. If you ascend to a level that another hero is already on, you have a fight! Both of you roll a die (red for the attacker, blue for the defender). The higher roll wins, and the loser has to drop down a level. If the loser drops onto a level that’s already got someone on it, another fight happens. This continues until every hero is alone on their level. The highest hero gets the gold hero medal. Rhino Hero – Super Battle can entertain two-to-four players for ten to twenty minutes. It’s a wonderfully kinetic game, like a lot of HABA’s games. It’s perfect for entertaining children as young as five-years-old and a great addition to board game night if you’re looking for a very different sort of challenge from your usual tile-placement and resource-management games.