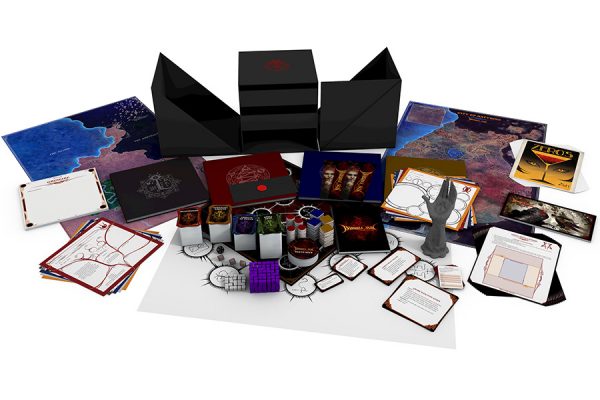 For almost a decade, Monte Cook’s name was synonymous with d20, from his work as a senior designer on D&D’s third edition (which begat Pathfinder) through his variations on that model in Arcana Unearthed and the extremely popular Book of Eldritch Might. For a while, Cook’s work defined the mainstream of RPGs.

In 2006, however, Cook bucked all the trends with the release of Ptolus, a massive campaign setting. And by massive, I mean huge; the book weighed in at 672 pages. It was an incredibly in-depth campaign setting, an adventure path back when Paizo was first experimenting with the form in the pages of DUNGEON magazine, and a detailed world full of little wrinkles on the familiar. It included a CD that contained a short description of the world and a guideline for creating PCs (very much like Pathfinder’s Player’s Guides) and additional handouts for the DM to print off and hand to the players during the game.

In short, Ptolus was in all ways a boutique product. By that I mean extremely specialized and full of the sorts of extras we’ve come to expect from a luxury-grade RPG product. Cook himself described it as the “most deluxe roleplaying product ever published.” It even came with a deluxe price: $120.

After a decade of releasing more mainstream products, Monte Cook is at it again with Invisible Sun. This is a boutique offering the goes beyond anything we’ve seen in RPGs before. The game comes in a black cube that contains four hardback books (clocking in at over 600 pages between them), a spiral-bound GMs notebook to help organize your game, dice, more than a thousand cards, cloth maps, and a strange resin hand sculpture designed to hold the cards so everyone at the table can see which one is active. There’s a “Path of the Suns” game board, tokens galore, a poster map, and player handouts. If you’re looking for an RPG that passes the heft test, Invisible Sun has got you covered; the Black Cube weighs in at over 20 lbs!

While all of that makes Invisible Sun unique among RPGs, what is the game about? Invisible Sun posits that what we call the “real world” is, in fact, a shadow of a true reality, a multi-world realm called the Actuality. The PCs are people who have been dwelling in the shadow of the “real” and have “woken up” to their true reality, which is a surreal place of magic, demons, and ghosts. It’s a world where you can trade a bit of your soul for a secret that can shake the world or transform your physical appearance at a whim, where keys rain from the sky and an ancient city bears scars from undetonated ordinance leaking weaponized hate. Monte Cook describes it as “Harry Potter’s wizarding world if it had been written by Philip K. Dick.”

Invisible Sun will use a unique rules system, though bits of it will be familiar to those of you who’ve picked up Monte Cook’s Cypher System games like Numenera and the Strange. For instance, like Cypher characters, Invisible Sun PCs are built as a sentence. In Numenera, the sentence was: I am an adjective noun who verbs. In Invisible Sun, the sentence is: I am a [FOUNDATION][HEART] of the Order of [ORDER] who [FORTE]. The final steps of character creation are done at the table, with the other players helping to fabricate such things as the neighborhood your house is in or your social reputation.

During play, players spend points from stat pools to improve their chances of success. Usually you roll a d10 and try to beat a target number, adding whatever bonuses you have active and that apply. You can burn points from your stat pools to lower the target number or to roll an additional die. You can also use magic to roll additional dice, though this risks weird or bad side effects or backlash. When you’re tackling a magical problem, you’ll need multiple successes, which means you’ll need to use magic in order to roll multiple dice.

The rules recognize three modes of play that are part of every Invisible Sun campaign. The first two are well known to anyone who’s played an RPG before. These include the careful, step-by-step tracking of every second and every action we’re familiar with from combat in games like D&D or Pathfinder. The second mode, Narrative Mode, is the looser sort where things happen at a fast clip and hours, days, or even weeks or months can pass with a one-sentence summary. In D&D, this is generally how we handle long-distance overland travel or the preparations the party might make when they’re back in town, resupplying for their next exploration of the dungeon.

To those well-known styles of play, Invisible Sun adds a Development Mode. Cook’s example of this sort of play comes from his childhood. The weekly D&D game would begin on the walk home from school, with the players asking questions about the setting or making plans for what they’d do. There wouldn’t necessarily be any dice or even character sheets, just interactions, organizing, and shooting the breeze about the campaign.

Invisible Sun takes that free-wheeling mode of play and makes it part of the game. The Sooth Deck, illustrated cards that serve multiple mechanical purposes, can be used as a controlling or inspiring mechanic for such sessions. This mode can be played by the GM and a player over coffee, or by players without the GM present, or even by a player alone. To facilitate this, the game comes with a smart phone app to allow the GM to interact with these sessions-between-games, even if they’re not physically present.

In short, Invisible Sun is not like any other RPG you’ve played before. It offers premium contents and play-aids at a premium price. It promises to change the way you play RPGs with its unique systems and approaches to game mechanics. And, if Cook’s previous work and Invisible Sun’s Kickstarter success are anything to go by, it’ll leave a lasting impact on the hobby.