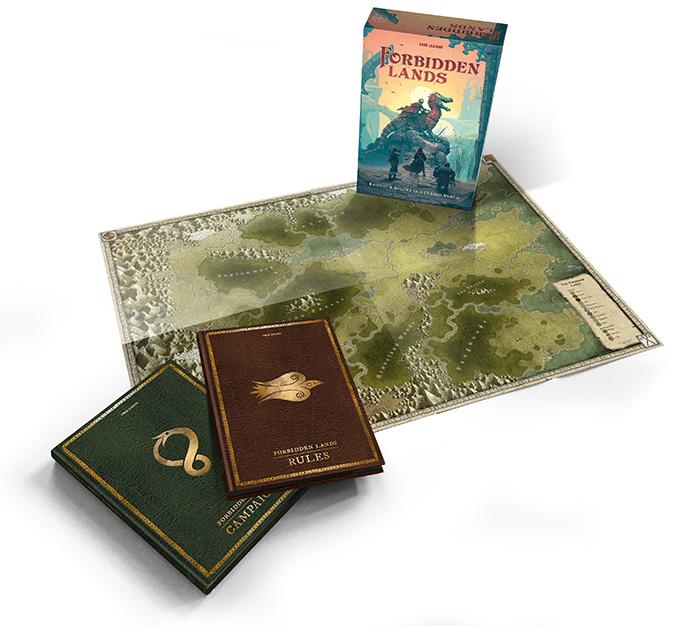 Much digital ink has been spilled asking if the fifth edition of Dungeons & Dragons is an old-school game. Free League Press’ The Forbidden Lands RPG leaves nothing to argue about; it is an unabashed full-throated love-song not just to the games of yesteryear, but the movement that’s sprung up to preserve and build on those old styles of play.

The game comes in a packed box. Inside, you’ll find a fold-out color hex map for the players to explore, as well stickers to add to the map. Like in Legacy-style board games, you’ll change the map by adding the stickers to it, marking the locations of special dungeons, villages, castles, as well as where PCs died, to make the map unique to your game.

You’ll also find a pair of hardback rulebooks with ribbon bookmarks. These look like the sorts of things you’d find in a library, books of mythology or epic fantasy, and strongly reinforce the themes of the game. The interior art is black-and-white ink illustrations, again hearkening back to the RPGs of the ‘70s and ‘80s.

The Forbidden Lands RPG has a detailed history of clashing civilizations that climaxed with the unleashing of a demonic blood mist across the land. This mist slew any caught out in the open after dark, isolating the Ravenlands for 300 years. Those mists have now receded. Why? And what treasures now lay revealed for enterprising plunderers and explorers to claim? This is the central challenge of the game: to uncover the secrets of the past and to loot its forgotten treasures.

But while the past is described in epic detail, there is no metaplot to follow here; every group will make their own story in this game, woven from the consequences of their choices as well as the dictates of random tables that help the GM populate the hex map. There are three detailed locations in the GM’s book as well as random tables for generating isolated villages, daunting castles, and lairs full of monsters and treasure. There are 21 pages of random encounters, each crafted to inspire interesting play beyond mere combat, and the bestiary includes tables to randomly generate new and bizarre demons to challenge the PCs. Player characters are built by picking a kin (or race) and a profession. Kin include humans, halflings, dwarves, elves, goblins, orcs, and the anthropomorphic wolfkin. Professions include fighters, hunters, minstrels, peddlers, rogues, and druids, among others. There are four stats: Strength, Agility, Wits, and Empathy. Stats are chosen by a point-buy system based on your age. Being young gives you more stat points but being old gives you more reputation, skill points, and talents. There are sixteen skills and they cover things like melee, marksmanship, lore, survival, and insight. Talents are more specialized tricks and knowledge, like being ambidextrous, specialized in a weapon like an axe, having a sixth sense for danger, or experience as a tailor or tanner. Each race has a talent, and each profession has a handful of special talents only they have access to.

The core mechanic is built around dice pools. When you try to do something, you roll a d6 for each point in your attribute and for you level in the skill. You might also add extra dice if you have an appropriate tool. Every 6 you roll is a success. If you don’t get enough successes, you can push your roll. You grab every die that didn’t come up a 6 or a 1 and reroll them. Every 6 adds to your success. Every 1 that isn’t on your skill dice can be dangerous. A roll of 1 on equipment dice causes damage to your equipment. Rolling a 1 on your attribute dice causes you to lose points in that attribute but also gives you a Willpower point, necessary for casting magic spells and activating the more powerful talents. In the Forbidden Lands, no pain literally means no gain. Fall to zero on any attribute and your character is broken. This can mean rolling on a critical injury table. There’s a different table based on if your hurt was caused by sharp weapons, blunt weapons, or horror. You could have your nose cut off (causing you to be less effective at social skills), get skewered in your groin (causing you to take additional damage when you try to move or attack), or be plagued with nightmares that prevent you from enjoying the benefits of a good night’s sleep. And some entries on all three tables can cause instant death! This is fitting as The Forbidden Lands is a game about exploration and survival. Encumbrance is based on an easy to use system which allows your character to carry an amount of gear equal to twice their base (not modified by taking damage) Strength score. Especially heavy items might count as two, while tiny items (small enough to hide in your fist) don’t count at all. Some items are consumables. These are rated with dice, ranging from d6 to d12. Every time you use a consumable, you roll the die associated with them. If you roll a 1 or a 2, you reduce the die one step. If you were down to the d6 and you roll a 1 or 2, you’re out of that consumable. This means you don’t have to keep track of every arrow, pint of water, or pound of iron rations, but it also adds a hefty dose of uncertainty to any expedition into the wilderness. It also makes the ability to forage for supplies or craft them in the wilderness extremely important to every group.

There’s so much more that can be said about The Forbidden Lands. We’ve barely touched on the dark and grim setting, magic, the benefits of building strongholds (and the amusing table you roll on if you fail to pay the retainers working there), or how the magic items make clever use of the dice pool mechanic and come with drawbacks reminiscent of early D&D’s artifacts. Suffice it to say, if you’re looking for a gritty RPG focused on survival and exploration in a grim, low-magic setting with a strong sword & sorcery feel, you want to talk to the RPG experts at your local Dragon’s Lair Comics & Fantasy® about The Forbidden Lands boxed set today.