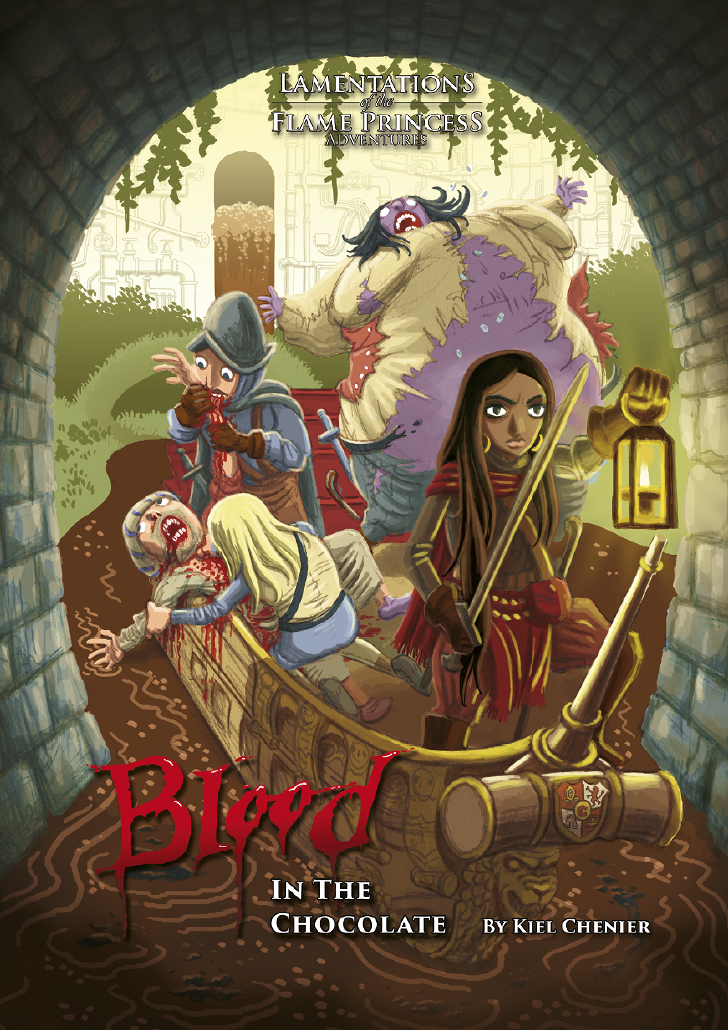 Nothing defines old-school D&D like clever challenges for the imagination and resourcefulness of the players. And few do that sort of thing better than the writers published by Lamentations of the Flame Princess. Last year, Kiel Chenier took the Gold ENnie for Best Adventure with his Charlie and the Chocolate Factory inspired Blood in the Chocolate.

As with most LotFP adventures, this one takes place in a magical and horror-infused version of our world’s 17th century. Decades before the sugary, tasty candy we know as chocolate today, the daughter of an explorer to the new world has taken Europe’s culinary scene by storm with a sweet, dark treat that is literally addictive. What is her secret? It’s up the players to infiltrate her bizarre factory and uncover the horrors that lurk within.

Without spoiling things too much, what the players will find is a river of molten chocolate, horrors not meant for mortal eyes, and cursed substances, traps, and weapons certain to leave the PCs in (at times literally) sticky situations. Some of these will be immediately recognizable to fans of Willy Wonka’s magical factory, whether in book or movie form. Kiel’s taken the themes of the book and distilled them into a D&D adventure full of eldritch terror and playful body horror that will tax the players’ creativity even as it warps their PCs.

This adventure more than deserves the accolades it’s garnered. And, like nearly all LotFP books, it’s designed to be easily used at the table. The book is slim but with redundant maps to make navigation a snap for the DM. The end papers are covered with useful information, including a handy check-box tracker for marking the deaths of the factory’s inhabitants. Illustrations are provided by Jason Bradley Thompson, best known for his humorous walk-through maps of classic D&D adventures. Thompson’s mix of comedic and horrific perfectly fits the tone of Blood in the Chocolate.

While written for TSR-era D&D games, it’s easily converted to 5e and makes an excellent low-to-mid-level adventure. Ask the RPG experts at your local Dragon’s Lair Comics and Fantasy® about Blood in the Chocolate today and give your PCs the opportunity to die deliciously.