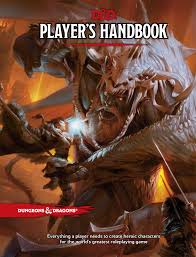 Those of us who patronize Dragon’s Lair have had the week to peruse D&D 5th edition Player’s Handbook. Here are some thoughts on a brief read-through:

All in all, a very promising start. We still don’t have quite enough to run a campaign (there’s only a smattering of monsters listed in the back of the book and we still don’t have rules for awarding EXP). But we do have everything we need to see how D&D is going to play at the table. I look forward to hearing about people’s experiences with the game.