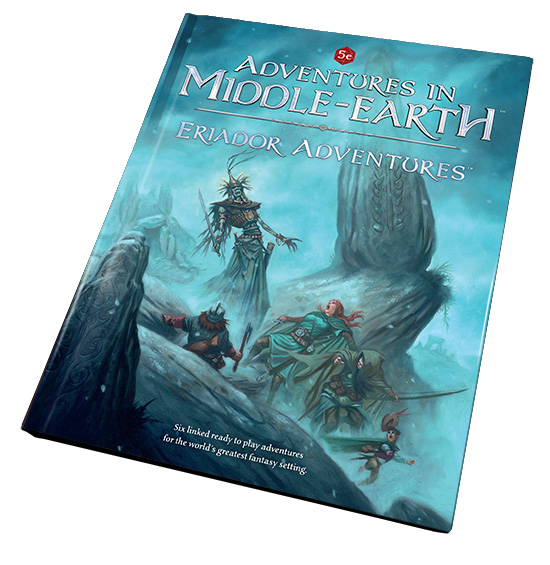 Like The One Ring, Adventures in Middle Earth takes place in the Wilderlands (the lands surrounding the Lonely Mountain) between the Battle of the Five Armies and the death of Smaug, and Bilbo’s eleventy-first birthday party. The book begins with a review of the setting before discussing character creation.

Adventures in Middle Earth uses the same cultures as The One Ring in place of race. So if you want to play an elf, you’re playing an Elf of Mirkwood, and if you want to play a human you have to decide if they’re from Rohan or Minis Tirith or a Beorning (among other options).

You then pick a class. As this is Middle Earth, you won’t find wizards (who are semi-divine beings and limited in number) or clerics. You will find burglars, however, and scholars (who are healers using herbs and poultices but won’t be flinging any fireballs), slayers, wanderers, and wardens (who are a sort of inspirational warrior and leader type).

The game uses D&D backgrounds, but instead of the pre-adventuring mundane careers of 5th Edition, Adventures in Middle Earth has extremely flavorful backgrounds like oathsworn, loyal servant, fallen scion, hunted by Shadow, and doomed to die. These backgrounds are much more about having a roleplaying hook to describe your character rather than just being what your character was up to before they accepted the call to adventure.

Equipment offers some flavorful wrinkles as well. For instance, pipe smoking is a tool skill. While D&D’s magic items are not in evidence, there are heirlooms, items with names and histories, like Orcrist, the elven blade carried by Thorin Oakenshield and called “Biter” by the goblins.

You can acquire heirlooms through plundering troll lairs, the way Thorin found Orcrist, or you can acquire one through a virtue. Virtues are like D&D’s feats but instead of being optional, these are much more strongly tied to the setting and rules of the game. Many are only available to certain cultures and are the source for the most magical-like powers in the game.

The adventuring section brings The One Ring’s journey system to D&D, and for some DMs, they’ll want to lift this section even if they never use the rest of the book. If you’re tired of the overland trip to the dungeon being a gloss of “many days pass,” the journeys of Adventures in Middle Earth may be just what you’re looking for. Players pick roles for their characters to perform on the journey (from scout, guide, hunter, and look-out) and then the route they’re going to travel by. The GM then rolls a d12 to see what happens. They could encounter friendly travelers, inclement weather like flash floods and storms, or even enemies. At the end of the journey, the GM again rolls to see what shape the PCs are in when they reach their destination, and if there are any lingering ill effects from their time in the wilderness. One of the things that can happen to those traveling through the wilderness is corruption by Shadow. You can also acquire Shadow points by experiencing harrowing events, committing misdeeds, or carrying tainted items (like a certain Master Ring). How much Shadow you can carry is dictated by your Wisdom score. Carry too much, and you’ll suffer various debilitating effects and conditions, and possibly even go mad, giving in to despair or suffering from dragon sickness.

There are also rules on audiences, describing how the PCs can acquire face-time with important personages and what can happen from such meetings. These are heavily based on culture, with some cultures being strong allies while others are openly hostile to one another. This section also describes how you can acquire titles and what the effects of having a title are.

Finally, there are rules for what’s called The Fellowship Phase in The One Ring, otherwise known as “down time” to most gamers. You can use this time to train your PC, acquire new virtues, or remove the taint of Shadow.

Adventures in Middle Earth is not a complete game in itself. It assumes you’re familiar with D&D’s 5th edition rules. That said, it makes an excellent addition to any DM’s tool box, even if you’re not interested in running adventures in Tolkien’s setting. It’s an especially good starting point for anyone who wants to run something darker and grittier and with less magic than the normal default D&D setting. Ask the RPG experts at your local Dragon’s Lair Comics & Fantasy® about both The One Ring and Adventures in Middle Earth today.