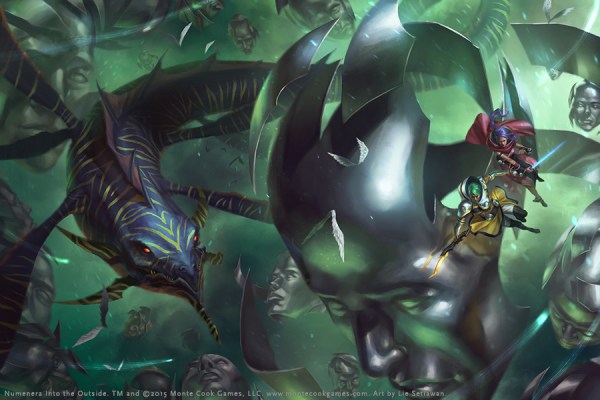 It’s hard to believe that the team at Monte Cook Games is as small as it is when you consider how much they get done. The entire company is, by my last count, less than a dozen people and yet they are supporting Numenera, The Strange, the Cypher System, and working on a brand new RPG. It’d be easy to assume that the oldest of their products, the odd and elegant Numenera, would be getting ignored. Instead, we’re seeing new books that expand the possibilities of a setting and system that already seem boundless.

The latest is cleverly titled Into the Outside and you can think of it as a Manual of the Planes for Numenera. It’s all about travelling to other dimensions, stumbling into alternate realities, and other fun ways to muck about with the space-time continuum.

The book is laid out to slowly ramp up the weird. The first chapters are stuff you’ve seen before in RPGs: moving in-and-out of phase to become insubstantial or even invisible, using dimensional travel to teleport, adventure locations that span multiple dimensions, and cross-dimensional effects and bleeding to create obstacles or traps. We get a handful of locations that can be used to travel from the core world of Numenera to other dimensions, as well as the hazards usually encountered in such places. From that point on, things get progressively odder.

There’s a large vessel sporting a massive drill designed to burrow into other dimensions to plunder their resources. We get an alternate version of the core world that looks exactly the same but for an Invasion of the Body Snatchers twist. There’s a Gormenghast-like infinite palace with potential exits to nearly any dimension you can imagine.

And then things start getting weird. There’s the dimension all those infamous Nibovians come from. There’s a dimension where everything and everyone is experienced as sound. And then there’s one where thoughts shape reality and metaphors are weapons of mass destruction. Much of the space in these later chapters focuses on how to play them at the table and the cool things they can do for your campaign (which is very welcome since a dimension of sounds is a bizarre enough idea to get across all by itself, forget how to travel, interact, or fight in such a place). Most of these locations or dimensions get around a dozen pages each, supplemented by a dozen more dimensions covered by a simple, one-page outline that primarily serve as inspiration. I was surprised that there was no list of new cyphers in the book (there are a number scattered through the text and pointed out in the index), but we do get a small bestiary.

We also get the lovely and weird art we’ve come to expect from the Numenera line. The front end-papers are a map of the dimensions discussed in the book. This map is also reproduced as a poster tucked between the cover and the last page.

Into the Outside is a 159 page hardback in the coffee-table style of the other Numenera books. If your campaign has gotten a bit stale and could use something really off-the-wall to shake things up, you should definitely pick up this book. As much of it is descriptions, clever ideas, and practical advice on running (sometimes extremely) unusual settings, you can use Into the Outside for any RPG that includes the idea of travelling to other dimensions, including D&D and Pathfinder. Find Into the Outside on the shelves of your Dragon’s Lair Comics and Fantasy® today.