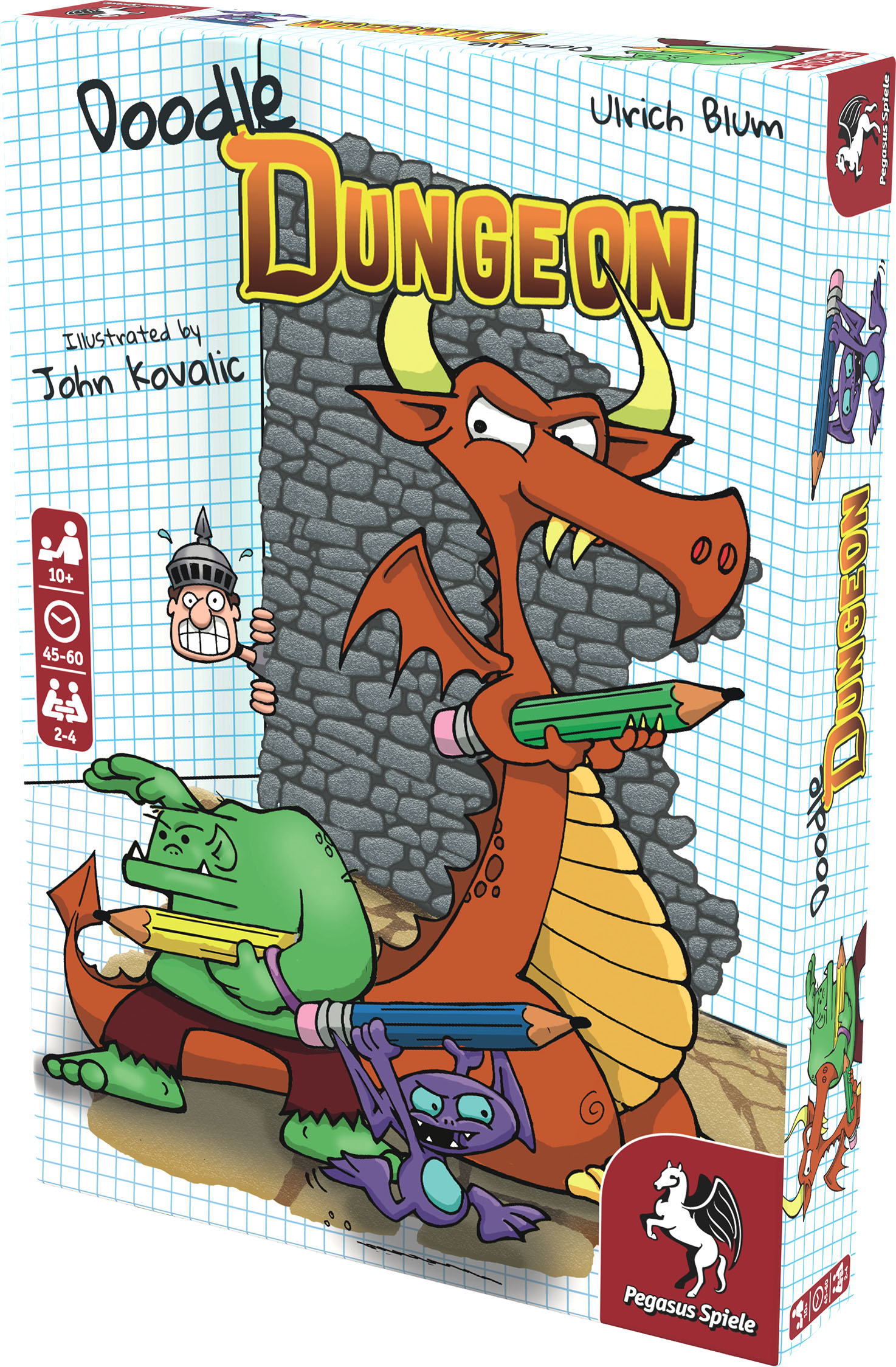 Doodling the Dungeon of Your Dreams

Dragons know that heroes are the worst!  They’re always sneaking into your dungeon, trying to nick your loot and young kidnapped royal-type persons.  A good dungeon is a must for any self-respecting dragon.  This being the case, we at Dragon’s Lair Comics and Fantasy® highly recommend Pegasus Spiele’s Doodle Dungeon as a hands-on primer in good dungeon design.

Doodle Dungeon combines card-drafting and dungeon-drawing to make a fun little contest in who can build the dungeon that best protects your treasures.  You begin the game by drafting cards.  You’ll lay out a number of cards face-up.  There are two important elements on these cards.  In the large middle area are actions which we’ll use later in the game; for now we’re interested in the building components along the bottom of the card.  A typical card might give you three wall pieces, an orc, and a trap.  After choosing your card, you’ll draw all of these on a piece of grid paper, slowly building up your dungeon as you go through the cards.  The player who gets to choose first changes after each draw in a clockwise direction.

Another building option is improvements.  These look like little check-boxes.  If you choose a card with one or more of these, you get to mark the little improvement check-boxes across the top of your dungeon sheet.  These create improvements across your whole dungeon, making monsters tougher and traps more deadly.  You can also make your treasures more valuable, and add to the number of cards you’ll hold in your hand when those pesky heroes show up to steal your treasures!

Those treasures must be placed on a square with a monster on it.  But you don’t mark them on your map; instead, you make a note of where they are, but keep it secret for now.

Now everyone passes their dungeon to the right.  Each player then tries to draw a path through the dungeon they think will gather up all the treasures.  This path has to be a continuous line and may only pass through each square twice!  Then, while the hero is making their way along that path, they must fight the monsters as they reach them and survive whatever fiendish cards the designer of that dungeon chooses to play against them (these are the elements in the middle of the cards you drafted while drawing your dungeon).  But some cards have bonuses for the heroes, like healing potions and magic weapons, making it easier for them to gather all the treasures and get out alive.

Once everyone’s dungeon has been attempted, you score each dungeon.  You get points for each treasure still guarded by a monster, as well as any monster who survived the hero infestation.  You lose points for every hit point the hero escaped the dungeon with (assuming they got out alive).

The game sports fun art from John Kovalic and takes under an hour to play through once.  Its best played with two-to-four players.  It’s a great game to play if D&D night gets canceled at the last minute, you enjoy drawing little goblins and dragons, or if you just want to practice your dungeon-designing skills.  Talk to the loyal, not-for-eating (Humph!) human helpers at your local Dragon’s Lair Comics and Fantasy® about pre-ordering Doodle Dungeon today.