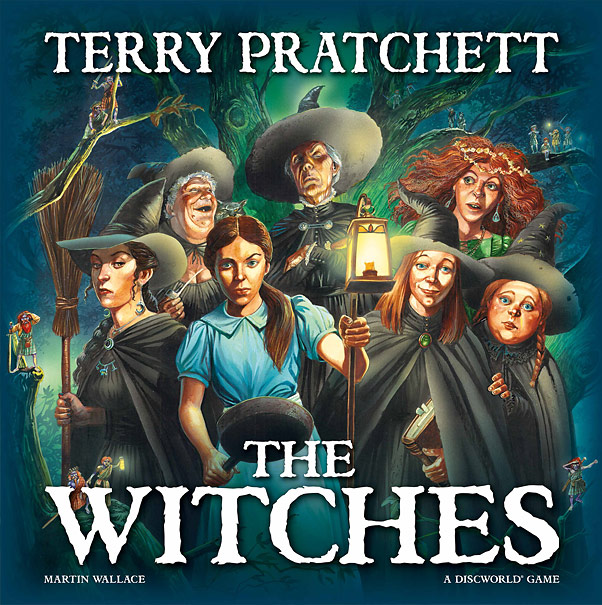 Elves & Tea Parties in The Witches: a Discworld Game Fans of Sir Terry Pratchett’s Discworld novels already know Lancre is a land full of troubles. From sick pigs to elvish invasions, the good (if somewhat dim at times) folk of Lancre are beset by endless adversity. Luckily, they can always turn to their witches for guidance or, when they fail to do that, to pull their collective fat out of the fire they just jumped in.

In The Witches you take on the role of a trainee witch, eager to prove her mettle by solving the problems of Lancre. Troubles come in two flavors: simple (represented by green tiles) and difficult (represented by purple tiles). The simple problems are things like sick sheep or death. Really troublesome issues are things like the King of the Elves, the Cunning Man, or Lily Weatherwax. You solve problems by rolling dice and playing cards. Solve enough simple problems and you get to expand your hand of cards. Solving difficult problems gives you a bonus on the die rolls.

The Witches is a cooperative game with a number of timers built into it. End up with three Elves tokens on the board, and everyone loses. Let the other problems on the board sit long enough and they’ll start to collect crisis tokens (which increase the number you need to roll on the dice to solve its problem). If all the crisis tokens are on the board, everyone loses. However, if you keep Lancre from drowning in either elves or crises, then the players tally up their points (earned by solving problems) to see who the winner is. 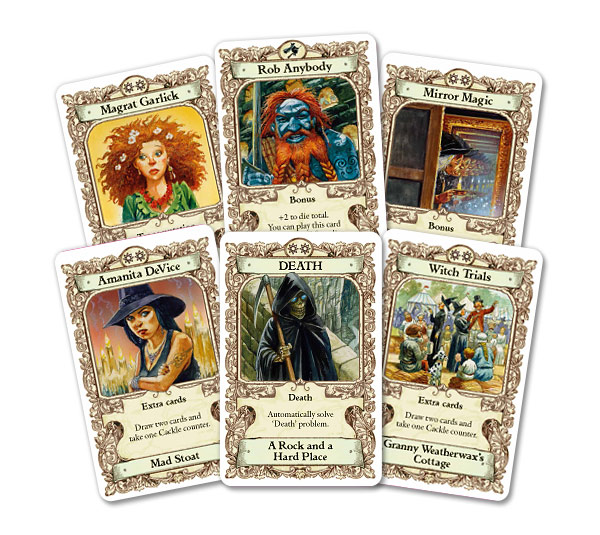 To solve problems, you roll dice to beat a score on the problem tile. You also have a hand of cards you can play. Some give you bonuses against certain sorts of problems, and others can even immediately solve some of the simpler problems. All cards have a symbol across the top. If you have a card with a flying witch on it, you can move to any open space on the board. If you have the headology symbol on your card, you can spend it to get a +1 for your roll. If you have a magic symbol on your card, you can spend it for a +2 to your roll, but you gain a cackle token. You can also gain cackle tokens by rolling 1s on the dice. If all the cackle tokens are claimed by players, then you collect your cackle tokens from the player with the most. If you’re the player who has the most cackle tokens, you start to collect Black Anis tokens. Each of those gives you a -1 to your victory point total. Luckily, if you end your move on the same space as another witch, the two of you can have tea, allowing you both to shed cackle tokens.

The Witches can be played solo or by up to four friends. A typical game lasts about 90 minutes. The rules are fairly simple, but offer a number of strategic wrinkles that favor careful play and cooperation between the players.