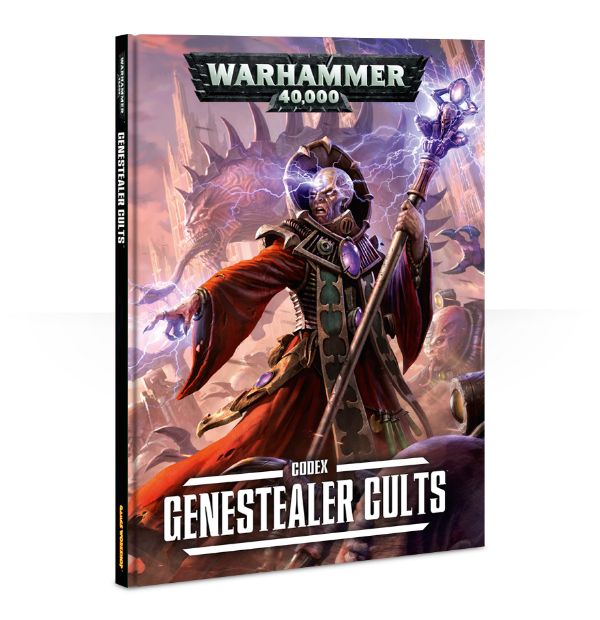 Hold on to your peaked caps, 40kers, the Genestealer Cults are back!

Yep, not only are we getting new armies that have only been hinted at before (like Imperial Knights and Adeptus Mechanicus), but old favorites are also getting brushed off, polished up, and returned to the ranks of armies with an actual codex.

For those of you who haven’t been playing the game since the early ‘90s, the Genestealer Cults are harbingers of the Tyranid harvester fleets.  A Tyranid scout infiltrates a world and infects one or more individuals with their alien geneseed.  Just like space marine geneseed, this rewrites the subject’s DNA, but is far subtler in its effects.  Children of the infected possess various tyranid-like features: extra limbs, reaping claws, bulbous heads with shark-like teeth.  Later generations are even more insidious, looking more and more human, able to integrate into society, perhaps even rising to places of prominence and influence.  These secret genestealers form the backbone of a local cult, admired for its focus on strong families, hard work, and communal spirit.  The secret, sinister goal of this apocalyptic cult is to weaken the planet’s defenses in preparation for a Tyranid invasion.

While the Tyranids have been a highly-visible part of 40k for decades, the Genestealer Cults haven’t had a codex since the days of second edition.  The new codex is all about mobility; lots of units get the Infiltrate special rule.  Some are able to “return to the shadows,” vanishing off the board and returning to active reserves, only to return later (and not necessarily on a board edge), possibly with casualties replaced with new fighters.  Such units entering from active reserves might even appear within inches of enemy units AND get a free attack!  The idea is very much that the cultists are everywhere: boiling up out of sewers, laying in ambush inside shipping crates, lurking in dark street corners or even appearing to be normal citizens doing their grocery shopping.

One thing fans of the Genestealer Cults of old were hoping to see this time around was the armored limo, a converted civilian vehicle that allowed you to shuttle your magus about the battlefield in style.  Alas, there’s no limo this time, but we do get the hulking Goliath.  Like the weaponized pickup trucks of real-world conflicts, the Goliath is a civilian vehicle converted to military service by the cult.  Of course, it’s been grimdarked up, giving it a massive open-topped bed capable of transporting six or more models, an armored driver compartment, and bristling with heavy stubbers and mining lasers.  The “rockcrusher” version comes with a dozer-like armor plate complete with whirling, rock-crushing tumblers that look capable of chewing through walls or terminators with ease.

While the new codex is heavily themed towards a mining colony gone bad, with rock-cutting and earth-drilling equipment pressed into military service by the cultists, they can also infiltrate local guard and Astra Militarum units as well.  A Genestealer Cult army can include sentinels, chimera, and even Leman Russ tanks.  This gives the codex an uprising-of-the-proletariat vibe that’s very suited to the cults’ “Invasion of the Body Snatchers” meets Giger’s xenomorph themes.

The codex and models should be arriving in stores soon.  Players looking for a different sort of army that takes mobility and surprise to extremes even the Eldar can’t match should definitely check out the Genestealer Cults.