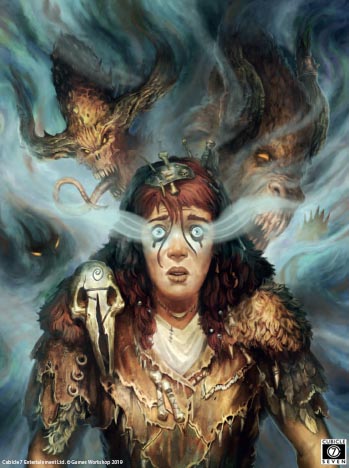 Everything Oldhammer (RPG) is New Again

Welcome back to the Glorious Reikland (or, as those who know and love it best sometimes call it, the Reekland, for its grim squalor and brutal callousness).  This is the world of Games Workshop’s Warhammer of old, before the Age of Sigmar, when magic came in eight colors and the aesthetic was Albrecht Dürer meets Hieronymus Bosch.  It’s a world of dwarven slayers sporting tattoos and bright orange mohawks, gap-toothed halflings cruelly wielding meat-cleaver and shivs, and weather-beaten human warriors bearing ornate zweihanders and arquebuses.

Cubicle 7 is doing the design and publishing duties for this, the 4th edition of Warhammer Fantasy Roleplaying (aka WFRP), and they’ve delved back into what’s worked before, drawing heavy inspiration from the games original edition from the 1980s.  The game uses the d100 system you may recall from earlier editions of the game, as well as the detailed character creation based on race, class, and career.  The careers each have four levels with better bonuses each time, meaning that it’s easier to pick and stick with a career like ratcatcher or riverwoman, giving that “band of common folk thrust into unusual circumstances” feel that many associate with WFRP.

While Cubicle 7 is leaning pretty heavily on the nostalgia for this game, that hasn’t prevented them from making improvements.  Where the old game could have interminable combats dominated by characters and monsters missing one another, the opposed-role combat system of 4th edition means an increased likelihood of a hit.  And you really don’t want to get hurt in this game.  There’s a massive list of iniquity that can befall your character, from disease and wounds to corruption and psychology.

The game is full of little options to help you fine-tune the game to be what you want.  Most of these use the twin resolution systems of Simple Tests (for when you want to quickly resolve uncertainty and move on) and Dramatic Tests (when you need more crunch and granularity in your results).  The rules assume players will swing back and forth between the two systems as desired over the course of the game, allowing you to fit the rules to how you want to play the game today, and without breaking things because you chose the simpler version this time but might opt for the Dramatic Test next time.

The core rulebook is a thing of beauty, with amazing and atmospheric art throughout.  The cover is a nice nod to the original cover artwork, but clearly in a modern style with characters more representative of what you’ll find inside the 4th edition rulebook.  You’ll find full-color artwork throughout the book illustrating the places, people, and perils of the Warhammer Fantasy world.

One of the best things about WFRP is the rich detail that’s built over the decades for the setting.  The book primarily focuses on the Reikland.  Future products promise to go into more detail for regions such as the Ubersreik in the starter box, or life in the taverns of the Reikland in the adventure quintet Rough Nights and Hard Days.  We’re also getting a director’s cut of the famous “The Enemy Within” series of adventures hopefully dropping by the end of the year.

And if you’d prefer to adventure in the new Warhammer setting of The Age of Sigmar, keep your eyes on this blog.  We should be getting a wealth of detail on Cubicle 7’s RPG for that setting at GenCon this year.  In the meantime, be sure to ask the RPG experts at your local Dragon’s Lair Comics and Fantasy® about Cubicle 7’s Warhammer Fantasy Roleplay today.