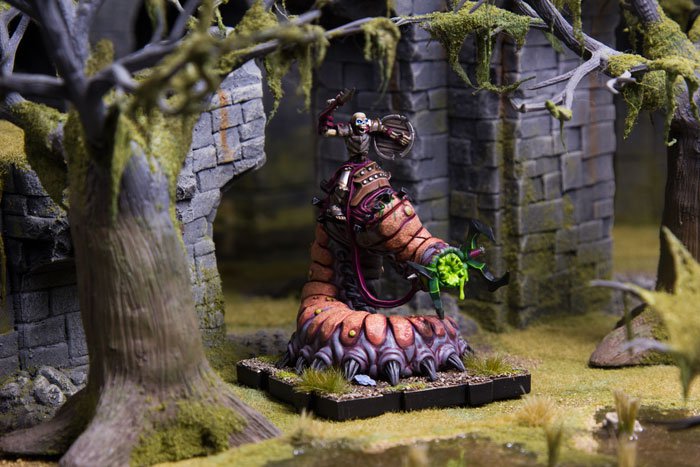 One of the big reveals at GenCon this year was Fantasy Flights’ announcement of their entry into the fantasy war-gaming market with RuneWars. So far, not a lot is known about the world the game takes place in; we only know that there are two factions (the noble Daqan Lords and the vile hordes of Waiqar the Undying) and that everyone in this fantastical world enjoys using the letter q without any following u.

Fantasy Flight is being very open about the rules of RuneWars. Clearly, they’ve learned a lot from the success of their Star Wars miniatures games like Armada and Imperial Assault. Just looking at what comes in the box reveals familiar-looking dials, cards, and measuring tools. Unlike Imperial Assault, this is not a game of few units skirmishing as individuals. RuneWars is about the maneuvers of large formations. The game comes with square, interlocking bases that the minis sit in, making the movement of large units much easier. The game reinforces this theme by multiplying your attacks by the width of your formations and allowing a number of rerolls based on the depth of your formations. Thus, a long line hits harder, but a deep column will hit more consistently.

All the units come with a card that describes their statistics, special powers, and potential bonuses. The larger the unit, the more upgrades you can purchase for it. Some special powers can only be activated if the runes cast at the beginning of each round turn up enough of the right colors. If the runes are favorable, it’s a good time to push forward your attack. If not, you might want to sit back and avoid contact with the enemy.

Each unit also comes with a command tool comprised of two dials. One dial is your command to that unit for this round and the other is the bonus you assign to it. Each command comes with an initiative number that tells you when this unit activates. Some commands are extremely powerful but don’t get executed until later in the round. Potentially, things will have changed enough by then (an enemy moving out of range, for instance, or your unit being sufficiently weakened) that the command you gave them is no longer a good idea. RuneWars commanders will have to weigh the benefits against the risks of each action. Movement looks a lot like Armada, as is the point-scoring being based on mission objectives. If you gave your unit a move command, you put down that appropriate ruler and move your unit accordingly. You’ll want to be careful how you move some units, especially large ones. For instance, colliding with an enemy unit without using a charge action means you don’t get to attack this round and earns you a panic token.

Attacking units roll special d8s covered with symbols. Some of these symbols represent simple damage, some are surges that unlock special abilities like those in Imperial Assault. Still others allow you to invoke the panic tokens on your target. You draw cards and, if your target has enough panic tokens to activate one of the cards in your hand, you can put that card on the unit, forcing it to endure whatever penalty the card dictates. These could be anything from simply gaining more panic tokens to causing the unit to attack itself to auto-slaying any heroes attached to the unit.

You can get rid of these penalties by spending a turn rallying your unit. You can also pre-emptively inspire your troops, giving them inspiration tokens that can be used to discard one penalty card placed on the unit. All in all, RuneWars looks a lot like what you’d expect if you heard that Fantasy Flight was making a fantasy minis war game. We’ll get lots of art, lots of little doo-dads like curved rulers and dial-an-action command tools, and, of course, lots of minis and all the rules you need to play right there in the box, with the expectation of expansion sets for both factions in the future. Fantasy Flight is expecting RuneWars to hit store shelves in the first quarter of 2017.